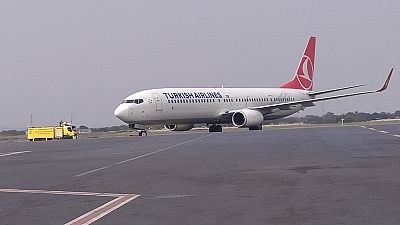 Turkish Airlines on Tuesday, June 30 launched its first flight between Pointe Noire, the economic capital of the Republic of Congo and Istanbul.

The flights are seen by both Turkey and Congo as a move to boost tourism especially in the oil-dependent Central African nation. Pointe Noire becomes the 58th Turkish Airlines destination in Africa after Port Harcourt in Nigeria and the 313th worldwide.

“Our conviction is that in the medium and long term, Africa will continue to increase its importance in terms of tourism and trade, and we will continue to invest in the potential of this beautiful continent, Kerem Sarp, Senior Vice President, Sales, Turkish Airlines said at the launch held at A.A. Neto Airport in Pointe Noire.

It should be noted that this also symbolizes Turkey's confidence in the measures taken by the Congolese Government in the field of economic development.

Congo seeks to cut its dependency on oil and has underscored developing the tourism sector as part of its National Development Plan to achieve economic diversification.

For Congo’s transport minister, Fidele Dimou, the flights will enable his country’s businessmen “to explore the Turkish market and vise versa.”

With Congo still reeling from the effects of the 2014/15 oil price crisis, evidenced by an IMF intervention earlier this month, the launch is a step of faith by Turkey.

The airline which has launched three flights per week will have to compete with market leaders like Ethiopian Airlines and Air France.