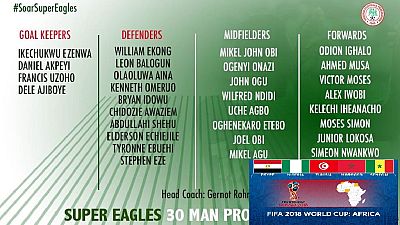 With three friendly matches lined up ahead of the World Cup including a prestige encounter against England at the Wembley Stadium on June 2, members of the squad have reiterated their readiness for the challenge ahead.

Nigeria will also face Democratic Republic of Congo and Czech Republic before the real action in Russia.

What is key for us is to get into the right psychological state to confront every opposition that lie ahead, including those that will be waiting at the FIFA World Cup.

“I have been asked several questions about the match against England, but I tell people that the England match is very important, just like the other matches that we have to play. What is key for us is to get into the right psychological state to confront every opposition that lie ahead, including those that will be waiting at the FIFA World Cup,” midfielder Ogenyi Onazi told the Nigerian Football Federation website.

Nigeria are the only one of Africa’s five representatives from the last World Cup to return for the 2018 edition, which is being hosted by Russia from June 14 to July 15.

The team representing Africa’s most populous nation will be looking to improve on their progression to the last 16 in Brazil but the side have been drawn in one of the toughest groups in what will be their fifth World Cup appearance.

The Super Eagles who were unbeaten in their qualification race to the World Cup will face Argentina, Iceland and Croatia in Group D.

German coach Gernot Rohr named 31-year-old former Chelsea midfielder Mikel as his captain for the extended squad, which was announced in a statement issued by the Nigeria Football Federation.

All invited players have been told to report to a hotel in Uyo, capital of the southern state of Akwa Ibom, on May 21 with the final list of 23 players needing to be submitted to FIFA by June 4.

Nigeria have been drawn in Group D in Russia, alongside Argentina, Iceland and Croatia, who they open their tournament against in Kaliningrad on June 16.