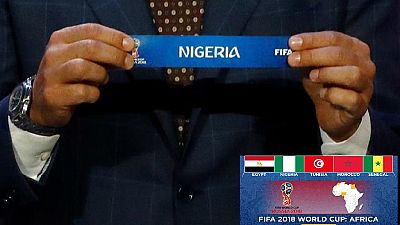 <p><strong>Nigeria’s Super Eagles were the first African team to qualify for the World Cup in Russia in emphatic fashion; pulling off an unbeaten run against strong competition from Cameroon, Zambia and Algeria.</strong></p> <p>Winning four games and drawing two, scoring 12 goals and conceding just 4, the Nigerian side, which is highly underrated by its fans at home, qualified with a game to spare.</p> <h3>Road to Russia</h3> <p>Nigeria started her group stage matches with a 2–1 win over Zambia in Ndola and defeated Algeria 3–1 in their second match at the Godswill Akpabio International Stadium.</p> <p>The 4 – 0 win against their cross country rivals, the Indomitable Lions of Cameroon, who are also the reigning African champions was Nigeria’s big statement of intent to the world.</p> <p>The Super Eagles will face Croatia on June 16 at the Kaliningrad Stadium in their opening game, before taking on Iceland on June 22 at the Volgograd Arena, while their last group fixture is against Argentina at the Krestovsky Stadium, St.Petersburg.</p> <h3>Group D</h3> <ul> <li>Argentina</li> <li>Iceland</li> <li>Croatia</li> <li>Nigeria</li> </ul> <h3>Nigeria past World Cup appearances</h3> <p>This will be the sixth time Nigeria features at the global football showpiece, having made their debut in the 1994 World Cup where they reached the second round.</p> <p>Nigeria will be facing Argentina at the World Cup for a record fifth time.</p> <p>In 1994, Nigeria topped their group which included Argentina, Bulgaria, and Greece. Nigeria defeated Bulgaria 3–0, lost to Argentina 1–2, and reached the second round after a 2–0 victory over Greece. They lost 2 – 1 to Italy in the second round.</p> <p>Nigeria were drawn into group D with Spain, Bulgaria, Paraguay in 1998. Nigeria defeated Spain 3–2 and qualified for the second round with a win against Bulgaria and a loss to Paraguay. The team was again eliminated at the second round hurdle after a resounding 4 – 1 loss to Denmark. </p> <p>In 2002, Nigeria failed to progress from the group stage after losing to Argentina and Sweden, before a goalless stalemate against England.</p> <p><img src="https://static.euronews.com/articles/46/31/463187/1024x576_bonus-before.jpg" alt="" /></p> <p>Nigeria failed to qualify for the 2006 World Cup.</p> <p>There was drama as then president, Goodluck Jonathan suspended the national team from international competitions for two years, following a dismal showing at the 2010 World Cup. The team had lost against Argentina and Greece, before a 2 -2 draw against North Korea, which wasn’t enough to prevent an early exit.</p> <p>The Super Eagles fared better at the 2014 World Cup, qualifying for the second round after a draw against Iran, a win against Bosnia and Herzegovina and a loss against Argentina. The team was eliminated by France in the second round.</p> <h3>Nigeria’s odds in Russia</h3> <p>While this team is currently ranked 51st on the <span class="caps">FIFA</span> world rankings, the lowest of all African teams going to the World Cup, the manner in which they qualified has many believing they could proudly hoist the African flag come June 16 in Russia.</p> <p>Senegal, Tunisia, Egypt and Morocco are 23rd, 27th, 31st and 40th in the world respectively.</p> <p>Confederation of African Football (<span class="caps">CAF</span>) president, Ahmad Ahmad is one of Nigeria’s biggest fans and described the team as ‘the strongest team to have qualified from Africa’.</p> <p>“No doubt, Nigeria is the strongest African team going to Russia and we expect so much from the Super Eagles,” Ahmad said during a meeting of Congress of Nigerian Football.</p> <p>Nigeria will face familiar foes Argentina who are ranked No. 4 in the world, while Iceland and Croatia are ranked 22 and 17 respectively.</p> <h3>Who is who?</h3> <p>Nigeria will be led by German coach, Gernot Rohr, who is credited with restoring calm and confidence in the team following the post 2014 turmoil that saw the Super Eagles take on five coaches in two years.</p> <p>While Rohr is yet to reveal his final squad for the World Cup, he has previously said he will stick with the group of players that achieved the unbeaten qualifying run.</p> <p>“We have built a good environment for the team and I believe all the players gave everything to secure the ticket to Russia,” Rohr told <span class="caps">BBC</span> Sport.</p> <p>Key players in the squad include experienced midfielder John Mikel Obi, Chelsea winger Victor Moses, Arsenal forward, Alex Iwobi and left back Elderson Echiéjilé who plays in Belgium.</p> <p><img src="https://static.euronews.com/articles/46/31/463187/1024x576_bonus-sskippetr.jpg" alt="" /></p> <p>Other players who helped secure qualification include Wilfred Ndidi, Odion Ighalo, Ogenyi Onazi, William Troost-Ekong, Oghenekaro Etebo, Leon Balogun, Shehu Abdullahi, Kelechi Iheanacho, Moses Simon, Ahmed Musa and goalkeeper Ikechukwu Ezenwa.</p>

No doubt, Nigeria is the strongest African team going to Russia and we expect so much from the Super Eagles.