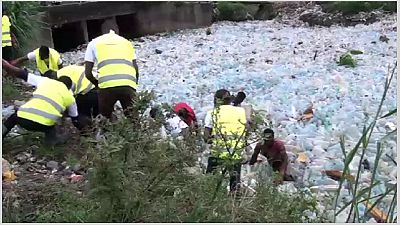 Retired Cameroonian footballer Roger Milla is already famous for being the oldest World Cup goal scorer, at the age of 42. But now he is proving an unlikely hero in Cameroon’s struggle against climate change and pollution-related menace, flooding.

He is behind Heart of Africa foundation, and organisation that’s dedicated to unclog the gutters and drains of Cameroon’s two major cities of Yaounde and Douala, and collecting and recycling plastic bottles.

The project that’s in its first phase has collected nearly 2 million plastic bottles and recycling them into construction blocks.

“Once the bottles are collected, the Heart of Africa foundation then recycles them, and mixes them with sand to make contraction slabs. This helps address the issue of sustainable development and maintenance of roads,” adds Pacrace Fegue, Executive Secretary African Heart Foundation.”

The waste is picked up by Hysacam and sorted, then another group of young people – different from those collecting the plastic – melt it down in a large tank over a wood fire. They later add sand to the molten plastic and pour the hot mixture into moulds.

The process doesn’t need water and the slabs set and dry at room temperature within 15 minutes, as opposed to the 24 hours it takes conventional sand-and-cement-based products, according to the head of the project’s technical team, Pierre Kamssouloum.

And, approved as sustainable by the country’s National Civil Engineering Laboratory, they are “environmentally friendly and waterproof,” said Samuel Nguiffo, executive director of the NGO the Centre for Environment and Development, meaning they can also be used in marshy areas and in the building of septic tanks.

The recycled slabs have already been used by the Yaounde city council for various projects and by the National Olympic sports committee in the construction of the national handball field, officials say.

And so far over 750 youths have been trained in the process of making the plastic slabs. The project aims to train a total of 2,500 people by 2017.