The history-making Atlas lions of Morocco are being cheered on by fans. They are celebrating the North African team's shock win over Portugal, as it becomes the first African side to reach the World Cup semi-finals.

"We can't believe it, even now we still can't believe it. We are still in a dream and we will wake up the day we win the Cup when we are going to take it to Morocco with us'' Saad Benaija, Morocco fan said

''It is incredible'' another fan says. "Really, there are not even words to describe the event we are living," Hajji Abderrahmane, a Morocco fan from France. "See, Cristiano cried today, where is Ronaldo? In a plane. It is finished".

The scenes of joy and celebration have not stopped. In Doha, Qatar where the feat was recorded, and across Moroccan cities Rabat and Casablanca where many are cheering, crying, dancing and singing on the streets back home.

Morocco has defied expectations in this tournament, previously beating Belgium and Spain. a run that had brought delight across the country and widespread support across the African continent and Arab world.

"What to say - what a joy! I never imagined it. We are the first African country to reach the World Cup semi-finals. What can I say? Really, it’s beyond imagination, people could never have imagined it" Rachid, a Morocco fan in Casablanca sharing his joy.

But it's not all done just yet for the history-makers. On Wednesday the Atlas lions will be hoping to go even a step further to the final when they face defending champions France. 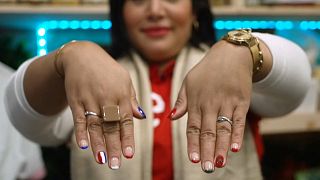