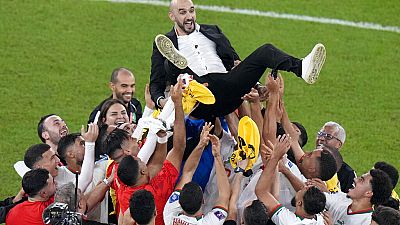 Morocco is the latest African team to make history by entering the last eight of the world cup, thanks to coach Walid Regragui who turned the story of the team around following the team's failure at the AFCON.

Regragui was appointed before the tournament with Moroccan football in turmoil after the previous coach Vahid Halilhodzic was sacked over "differences of opinion" with the country's football federation.

But in seven matches since then, the Atlas Lions have been unbeaten, conceding only once -- an own goal in their final group game against already-eliminated Canada.

One more win against Portugal on Saturday would make Morocco the first African team to reach the semi-finals -- surpassing the 1990 Cameroon side, Senegal in 2002 and Ghana's 2010 vintage.

"If you can do it, you can, if not, not," the 47-year-old said of breaking new ground for an African or Arab coach.

"It has nothing to do with being Arab or not. I fought for it. Maybe when I'm old, I'll be proud of it, but for the moment, I am mainly proud of my country.

"And with a local coach, it's the best thing for me and for my country."

Regragui's side battled fiercely off the ball to close down space against Spain on Tuesday in their first last-16 match since 1986.

Who is coach Walid?

Born in September 1957 in France to Moroccan parents, Walid Regragui played active football as a defender between 1998 and 2011.

A year after retiring from active football (2011), Regragui began football coaching as an assistant for Morocco’s national team in September 2012.

One year after his appointment, manager Rachid Taoussi was sacked and this move also led to his exit from the national team role in October 2013.

In May 2014, Walid Regragui secured a job as manager of Fath Union Sport, a role he held until January 2020.

Wydad Casablanca was his next destination in August 2021. Walid led Wydad to a CAF Champions League title in May 2022, dethroning Egypt’s Al Ahly to become African Champions.

By this time, the Morrocan national team under Vahid Hallidhodzic was shrouded with controversy and disagreements within its ranks.

The Morrocan Football Authorities took the decision to sack Hallidhodzic in August 2022 and appoint their own Walid Regragui to lead the Atlas Lions to the Qatar 2022 FIFA World Cup.

Walid Regragui and his charges arrived in Qatar as underdogs in a Group that included star-studded Belgium, and 2018 World Cup Finalists Croatia, and Canada.

A 0-0 draw vs Croatia was followed by a surprise 2-0 win over Belgium before the Atlas Lions secured a 2-1 win over Canada to finish Group leaders.

A tough Round of 16 clashes vs Spain was next.

A Compact and disciplined defensive performance vs Luis Enrique tutored Spain over 120 minutes was crowned by a 3-0 penalty shootout victory to reach the Quarter Final.

With this track record, Walid Regragui seems to have won the heart of many football lovers but the big question remains: will Walid Regragui be able to lead Morocco to world cup glory?

“You have to understand: I did not say that we were going to win the World Cup even if it is our wish. But you have to dare to dream. If we tell ourselves we can’t, then how can we achieve our dreams? You have to have that ambition.” Sportsstation quoted the coach in a report.

The coach is reported to have said this during a pre-match press conference before the win over Spain.