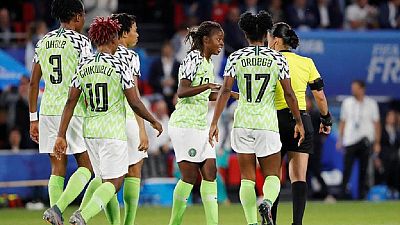 People on Twitter strongly remonstrated with a Video Assistant Referee, VAR, decision that denied Nigeria a point in their final group game against France at the ongoing Women’s World Cup.

Many people slammed a VAR decision for the retake of a penalty which had been missed on first attempt. The retake was converted and could effectively cost Nigeria – an Africa – a place in the Round of 16 stage.

Some called it a farcical decision, others said it was unfair. At half time, the Super Falcons were on their way to the next stage with four points in a game they had to at least draw.

The French side were awarded a penalty on the 74th minute mark. They failed to convert at first but the referee in consultation with VAR ordered a retake with the reason that the goalie had gone off her line. She was subsequently penalized.

On the second attempt, France’s Renard converted the only goal of the game with Nigeria holding on with ten-women after a player was dismissed for the foul that gave the French the penalty.

“The Super Falcons bowed narrowly to the hosts but they produced a glorious showing. They will wait for the outcome of games in the other groups to confirm their place in the last 16,” their official Twitter handle wrote after Monday night’s 1 – 0 loss to France.

Just watched. VAR saw the goalkeeper but ignored the French attackers encroaching at the edge of the box. The same video.

Another game at this #fifawwc spoiled by the completely bananas way VAR is being implemented. Even #FRA players are likely to feel #NGA have suffered an injustice.

Oh come on! That is so unfair on Nigeria giving France a retake. Keepers come off their line ALL the time. & that is marginal. Why punish Nigeria for such a minor infringement? #FIFAWWC

How about these French players encroaching Madame Ref and Constable VAR!!! What a joke of a system!! #FIFAWWC pic.twitter.com/gEiEzVCIHB

Extremely proud of our Super falcons of Nigeria vs France at the world cup. These girls gave it everything against a French side cheered on by a near full stadium & a doubtful retaken penalty. I am sad,disappointed, but proud of these girls! pic.twitter.com/dv4TAGDYVn