Just over a year ago, Indonesian sprinter Lalu Muhammad Zohri could barely afford running shoes and was pretty much unknown outside his small village on the eastern island of Lombok.

That all changed in a few seconds earlier this month when the 18-year-old orphan produced a blistering finish to beat the cream of the planet’s junior sprinting talent in the 100 metres final at the under-20 world championships in Finland.
Indonesia had never previously had a finalist at the championships, let alone a world junior champion, and Zohri has quickly been burdened with the hopes of a nation ahead of their hosting of the Asian Games.

Zohri’s sudden rise to the status of household name in the southeast Asian nation of some 260 million people is clearly still something of a shock to the quietly spoken teenager.

It was beyond my imagination," Zohri chuckled as he spoke to reporters on the sideline of a training in Jakarta. "I feel very proud and thankful.

“It was beyond my imagination,” Zohri chuckled as he spoke to reporters on the sideline of a training in Jakarta. “I feel very proud and thankful.”

Indonesian president Joko Widodo has praised him as a “collective inspiration to the nation’s athletes to achieve gold” at the Asian Games and ordered ministers to renovate Zohri’s humble woven bamboo home.

The teenager, though, is not confident about his chances of winning another gold at the Asian Games, which will take place in Jakarta and Palembang from August 18 to September 2, adding his focus would be getting ready for the 2020 Tokyo Olympics.

To win gold in the 100 metres on the Gelora Bung Karno track next month, however, he is likely to have to beat Nigerian-born Qatari Femi Ogunade and Chinese sprinters Su Bingtian and Xie Zhenye, all whom have run under 10 seconds.

Zohri’s story began in a village in northern Lombok. Like any other young Indonesian, playing football was his favourite past time at school, but his innate physical fitness has caught the attention of his former sports teacher, Rosida.

The success story of Zohri has inspired many fellow athletes and Indonesians living below the poverty line, and served as a reminder for the authority to pay more attention to the talents in rural areas. 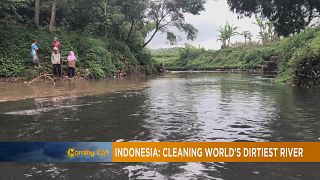 Can the world's most polluted river 'The Citarum River' be made clean? [The Morning Call]

Can the world's most polluted river 'The Citarum River' be made clean? [The Morning Call]