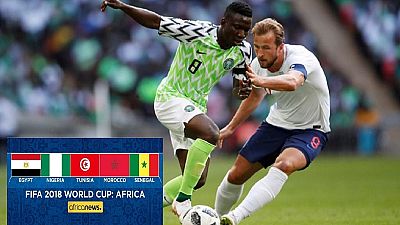 <p><strong>The Nigeria Super Eagles jersey for the 2018 World Cup in Russia has been hugely popular, both at home and abroad.</strong></p> <p>In Nigeria’s commercial hub, Lagos, the question isn’t whether you’re going to buy the neon green and white zig-zag jersey of the national football team, it’s how much you want to pay.</p> <p>It seems there’s a replica top to suit all pockets in the bustling markets, which also do a thriving trade in everything from fake Gucci swimming trunks to Kanye West Yeezy sneakers.</p> <h3>Pricey Nike original vs affordable Lagos replica</h3> <p>The official Super Eagles jersey is priced at $85 at the Nike store.</p> <p>But one Lagos market trader said he sells jerseys shipped from Thailand for 17,000 naira ($47, 40 euros), and demand is huge.</p> <p>“The ones I sell here are the highest quality in the market,” he told <span class="caps">AFP</span>. “By 2:00 pm I’ll get another 1,000 pieces, by the weekend it will be gone.”</p> <p>The monthly minimum wage in Nigeria is set at 18,000 naira, making even that price too high for many people.</p> <p>Another vendor who imports his jerseys from China has cheaper options. “We have quality and we have lowest quality,” he said.</p> <p>“The quality one you can even buy it (for) 5,000 naira, the lowest quality is 3,000 or 2,500 ($7, 6 euros).”</p> <h3>Nigeria’s Stylish swagger</h3> <p>Nigeria’s new kit has been a major talking point in the run up to the World Cup finals, which began in Russia on Thursday.</p> <p>Nike’s flagship London store was <a href="http://www.africanews.com/2018/06/02/counterfeit-sales-set-to-soar-as-nigeria-official-world-cup-jersey-sells-out/"target="_blank">stripped</a> of its Nigeria stock within minutes of it going on sale for the first time earlier this month.</p> <p>But it’s not just the jerseys that have made Nigeria the fashion darlings of the tournament.</p> <p>When the team arrived in Russia this week, they stepped off the plane dressed in an <a href="http://www.africanews.com/2018/06/12/photos-nigeria-makes-fashionable-entrance-in-russia/"target="_blank">all-white traditional outfit</a> with embroidered green wings spread across the chest.</p> <p>The look was completed with a white fedora decorated with an emerald green ribbon and matching feather and white shoes with green tassles.</p> <p>Nigeria, the youngest team of the tournament, carried off the look with aplomb, prompting fans around the world to vote them as the most stylish team in several polls.</p> <h3>Nike designer sought to capture ‘swagger’</h3> <p>It’s exactly that youthful swagger that Nike design director Pete Hoppins was hoping to reflect in the jersey.</p> <p>“There’s a confidence in all these young players, they’re going to go for it and we were attracted to that,” he told Fader magazine in an interview this month.</p> <p>“A lot of them are playing in some of the top clubs in Europe and there’s that boldness.”</p> <p>Nigeria open their World Cup campaign against Croatia on Saturday and fans will be hoping that they are as swaggerific on the pitch as they have been off it.</p> <p><strong><em><span class="caps">AFP</span></em></strong></p> <iframe src="//embed.scribblelive.com/Embed/v7.aspx?Id=2778493 &ThemeId=19714" width="100%" height="1200" frameborder="0"></iframe>

We have quality and we have lowest quality;