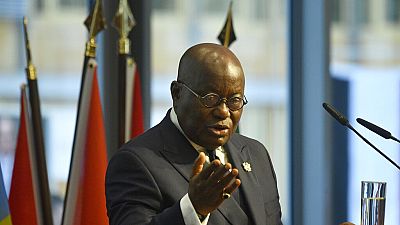 Ghana's President Nana Akufo-Addo has defended his decision to seek help from the International Monetary Fund (IMF), saying it was necessary to "restore public finances" after the twin shocks of the pandemic and the Russian invasion of Ukraine.

The decision has sparked an outcry in Ghana, which is in the throes of a severe economic crisis, with critics accusing President Akufo-Addo of reneging on his initial decision not to call on the IMF after saying a new tax would boost the economy.

IMF officials are in Ghana to help "restore macroeconomic stability, preserve debt sustainability and promote inclusive and sustainable growth," according to an official statement.

"All countries in the world are striving to return to a state of normality after the devastating impact of the Covid-19 pandemic, the consequences of which were exacerbated by the Russian invasion of Ukraine," the president said.

"In our case, we have decided to seek the collaboration of the IMF to repair, in the short term, our public finances," he added.

The West African country recorded 27% inflation in May, its highest level in two decades.

Ghana back to IMF as economic conditions worsen https://t.co/2An0Jq101d

Mr Akufo-Addo also said the government would continue to work in the medium and long term to strengthen the economy.

Ghana is seeking IMF assistance for the 18th time in its history. In 2015, the country obtained a loan of about one billion dollars in return for a fiscal austerity plan.

At the end of March, the parliament voted to create a highly contested tax on electronic transactions that triggered a social mobilisation.

The law, called "E-Levy", provides for a 1.5% tax on electronic transactions, including mobile money payments, which are widely used in the country.