More than 12,000 young people watched the teams from six African countries participating in the event, an initiative from FIFA, held at the historic Stade des Martyrs.

FiFA's General Secretary explains the idea behind this competition.

"The idea is for these children to eventually become role models for their community, but also for their country, as well as the true development of players through this training. When you look at how excited all the youngsters were from Morocco, Senegal, Benin, South Africa and Ethiopia when they met up with their Congolese friends, and with all these smiling faces, we know just how fantastic this pilot phase is going to be", said Fatma Samoura, FIFA's Secretary-general.

The competition included male and female teams that competed in a festive atmosphere building confidence and reinforcing the importance of equal opportunities.

"The foundations of cultural and social values in Africa always tend to split up boys and girls socially: "Domestic chores are for girls, and sport is for boys." So, we're trying to correct those biases by allowing girls to practice sport and to tell boys that there's nothing shameful about helping out their mum, their sister or their future wife", added Fatma Samoura, from Senegal.

For the young players, the success of this initiative is total. To represent their country and to compete with talents from all over Africa, many hope that the experience will be repeated soon.

"It's a great opportunity for us. I've been aiming at playing this type of competition for a while. We have this opportunity today and we're going to do our best", said Chance Kasindi, a young player from DRC.

Another player, Ethiopian Simon Habtamu, added "I'm happy, we are happy, it's a great chance. And the team spirit is good. All opportunities start here".

"It was a very easy game against Congo today. We played well, the other team played well", said Radia Laghni, a female player from Morocco.

"I'm feeling good and I'm feeling happy, because it's my first time experiencing playing against other countries. And I hope we will come back with a stronger team in the next tournament" concluded South-African player Goitseone Legobye.

The first Africa Schools Champions Cup ended the same way it started, to the rhythm of songs and dance and the promise of future opportunities. 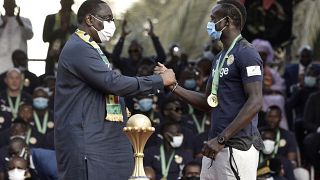