Sonko according to a Friday court ruling by judge Abdoulaye Assane Thioune was denied permission to leave Senegal. He was to attend a conference scheduled for this week in Lome, Togo's capital, after been invited by Togolese economist Kako Nubukpo.

In the statement announcing the decision of the Senegalese judiciary, Me Khoureyssi Ba, Sonko's lawyer, said that "nothing justifies the refusal pronounced Friday 21 May by the judge Abdoulaye Assane Thioune".

Sonko, a fierce critic of President Macky Sall, was arrested in March and later freed. But not before his arrests had sparked deadly protests across the country. At least six people were killed in the protests that erupted over an alleged rape case.

The 46 year old opposition leader who is very popular amongst the young in Senegal denies the rape charges. His party maintains the rape allegations against him (Sonko) were political.

But, in a political twist, many people turned against Sarr and defended Sonko, after the politician claimed President Macky Sall had a hand in fabricating the charges against him in a bid to stop the political movement against his (president Sall's) unconstitutional third term. 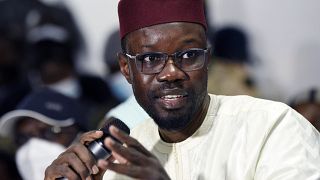