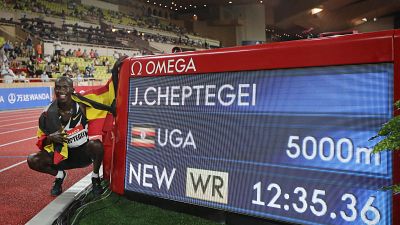 Duplantis broke the world record in the pole vault twice, topping 6.17m and 6.18m on back-to-back weekends in February just a few weeks before the global coronavirus pandemic ground the sporting world to a halt. When competition finally resumed, Duplantis capped his season and produced the highest outdoor vault of all time (6.15m) and finished the year undefeated in 16 competitions.

Athlete of the year and master of the pole vault, but @mondohoss600 is still looking to improve.

Duplantis, who celebrated his 21st birthday last month, is the youngest athlete ever named World Athlete of the Year.

"It was a really strange season, for me and everybody, but I was able to put it together and get some pretty good results," said Duplantis.

Athlete of the year and master of the pole vault, but @mondohoss600 is still looking to improve.

Rojas broke the South American indoor triple jump record in her first competition of the year, reaching 15.03m in Metz, France. At the World Athletics Indoor Tour meeting in Madrid, she leaped 15.43m in the final round of the competition to break the world indoor record by seven centimetres.