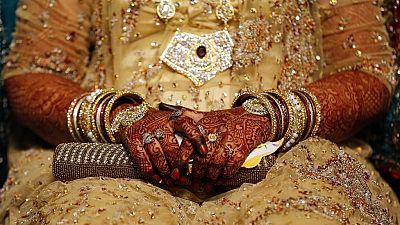 Local media outlets in Uganda over the weekend reported how an Imam ‘unknowingly’ married a fellow man. The story had it that the said wife had gone stealing and was arrested – found out if you want – during the burglary.

Almost a week on, the Imam has been suspended from clerical duties by the mosque, the ‘wife’ has appeared before a court and been charged whiles on social media conspiracies continue to be woven.

As at Thursday, the local Daily Monitor newspaper said the Imam had also been charged along with his wife on charges of having unnatural carnal knowledge.

How the episode started out

The saga is woven in the central Ugandan district of Kayunga, where the marriage took place weeks ago. The conjugal headaches of the Imam Sheikh Mohammed Mutumba, will come to light only after his ‘wife’s’ burglary move, uncovered by the neighbours.

The Daily Monitor said a female police officer reported the suspect as male after conducting a body search. The newspaper report included the account of a cleric at the imam’s mosque who said the imam needed counselling after his bride “refused to undress while they slept.”

The Imam of Kyampisi Noor mosque actually had entered a marriage with a 27-year male whose real name is Richard Tumushabe and not Swabullah Nabukeera.

Why the Imam has been charged

The Imam for having wedded a fellow man in the Islamic culture (Nikah) was charged with having carnal knowledge with a person against the order of nature, and remanded to Ntenjeru prison.

Appearing before the Kayunga Grade One magistrate Ms Irene Akello on Thursday, Sheikh Mutumba, 27, was not allowed to take plea because his case can only be heard by a higher court, the newspaper added.

The Kayunga District Police Commander, Mr John Lukooto, also confirmed that the ‘man wife’ Tumushabe had duped a number of men who fell in love with ‘her’ and later stole their money.

On social media, people continue to ask questions about how the Imam was led on by a fellow man till marriage and for as long as two-weeks living as a couple. Some averred that the entire episode smelled of a same-sex arrangement.

A gay rights activist on his part said criticism of the imam highlights intolerance in the East African country. Frank Mugisha, who runs the group Sexual Minorities Uganda, said Thursday the case proved “how homophobic the country is.”

“The imam could be right when he says he didn’t know,” he said. “Ugandans should respect people’s privacy. They are not necessarily homosexuals.”

Mugisha said it was not clear whether the imam’s partner is transgender, one reason his group had decided not to release a statement regarding the case.

Gay sex is criminalized in Uganda, where there have been efforts in recent years to enact stiffer penalties targeting homosexuals, including death by hanging. Many Ugandans believe homosexuality is imported from the West.

A harsh anti-gay law enacted in 2014 was later overturned by a panel of judges amid international pressure and threats of aid cuts. In enacting that law, President Yoweri Museveni accused “arrogant and careless Western groups” of trying to recruit Ugandan children into homosexuality, although he did not identify the groups.

According to Human Rights Watch, 32 African nations have varying laws criminalizing homosexuality. In many cases the anti-gay laws are left over from the colonial era.