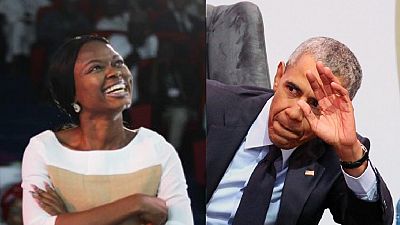 Former United States president Barack Hussein Obama has expressed pride in a Nigerian activist who was recently listed in the TIME 100 Next list of influential young people.

Obama’s praise for the 28-year-old Oluwaseun Ayodeji Osowobi was contained in a tweet he posted on Monday (November 18).

“Proud to see Oluwaseun Ayodeji Osowobi in this list. She’s an Obama Foundation Leader who’s organizing young people in Nigeria to help end sexual violence, and her work embodies what our foundation is all about: passing the baton to the next generation.

She was part of a handful of young Africans or persons with African extraction who made the TIME Magazine’s list. She was one of 53 women who made the list – the list is dubbed “the world’s most ascendant leaders” who are “rising stars in their fields.”

Reacting to Obama’s tweet, Oluwaseun promised to be part of the next generation of leaders whiles admitting that she was over the moon with Obama’s recognition. She was also named as the Commonwealth Young Person of the Year 2019 earlier in the year.

Founded in 2014, her initiative works to advance women’s sexual reproductive rights and advocate against gender-based violence.

It also provides medical and psychological support to victims and survivors of sexual and domestic violence.

Thank you so much BarackObama for the leadership & community service lessons via the ObamaFoundation. I’ll continue to build the next generation of advocates. https://t.co/cw38haJalK pic.twitter.com/QL7Si7uSPP

Dismayed by the lack of resources available for sexual-assault survivors in Nigeria, Oluwaseun Ayodeji Osowobi decided to start an organization dedicated to the issue—despite her fears.

“Telling my story as a survivor, that comes with a lot of stigma,” Osowobi tells TIME. Five years on, her organization Stand to End Rape (STER) has reached around 200,000 people across the country through its services, such as training for health workers and counseling for survivors.

Osowobi—who has been honored as an Obama Foundation emerging leader—has big plans for 2020, including lobbying the Nigerian government for a stronger bill addressing harassment at universities. —Suyin Haynes