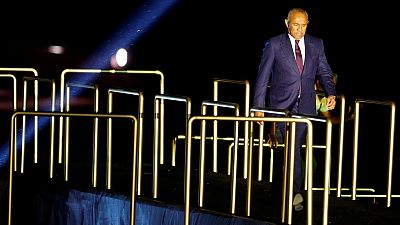 Egyptian authorities and the Confederation of African Football (CAF) have set up a special committee to deal with security concerns at the Africa Cup of Nations in Egypt next month.

At least 12 people were injured when an explosion hit a bus carrying mostly South African tourists in Cairo 10 days ago. The rudimentary device containing nails and pieces of metal detonated on the perimeter of the Grand Egyptian Museum.

“Security is a big problem in the world, not only in Egypt. No country can be sure that nothing will happen. It is very sad to feel like that,” said CAF president Ahmad Ahmad said on Wednesday.

No country can be sure that nothing will happen.

“The Egyptian government and CAF have for the first time implemented a security committee and they will continue to work together to try and make sure that nothing will happen.”

Egypt’s Interior Ministry said recently that militant group Hasm were planning a series of attacks in the country to create an “atmosphere of chaos”.

The Nations Cup will feature 24 teams from around the continent to play at venues in Cairo, Alexandria, Ismailia and Suez from June 21-July 19.

READ MORE: Meet the 24 teams that qualified for AFCON 2019

At the Nations Cup in 2010, three people were killed as the Togo team bus was attacked by militants as they travelled to the tournament in Angola, including assistant coach Amelete Abalo.

Togo withdrew from the tournament, which led to a CAF ban for the next two editions, though that was later quashed by the Court of Arbitration for Sport.