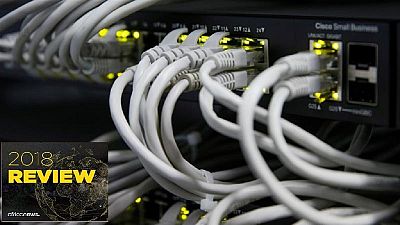 2018 was a somewhat tumultuous year for the information technology sector in most African nations, and indeed beyond the continent, as global tech giants struggled to convince users and policy makers on the question of data privacy and protection.

In this article, we highlight the most persistent trends and most read SciTech stories from the year 2018.

Dictionary.com named ‘Misinformation’ as the word of the year 2018, which was areflection of the level of toxicity on most social media platforms, as fake news and bots waged propaganda wars to influence public opinion.

“Misinformation has been around for a long time, but over the last decade or so the rise of social media has really, really changed how information is shared,’‘ said the Oakland-based company, highlighting that misinformation can be spread unwittingly.

Cameroon’s government sought the help of Facebook ahead of the presidential election in October, asking the tech giant to help curb the spread of fake news, especially regarding the ongoing Anglophone crisis.

Twitter, another popular social networking site in Africa, also reported this year, that it was suspending more than one million fake and dubious accounts per day.

Facebook was also at the heart of several scandals this year, as it emerged that users data had been accessed by third parties, and used for political campaigns, including the United States election, Brexit and elections in Africa.

Executives at several tech companies, including Google and Facebook, were summoned by authorities in the United States and European Union to give reassurances on protection of user data and privacy.

ALSO READ: Can Africa’s internet users be protected from data exploitation by ‘social networks they love’?

Social networking sites were nevertheless still quite popular on the continent, as several prominent politicians used them to leverage support and engage the electorate.

Zimbabwe’s president, Emmerson Mnangagwa reactivated his Facebook and Twitter accountsin January, saying he was hoping to ‘engage and work together to realise accelerated development for our beloved nation’.

Following the symbolic inauguration of Kenyan opposition leader, Raila Odinga as the ‘people’s president’ on January 30, Kenyans on Twitter were treated to some drama, as Odinga and president Uhuru Kenyatta, both identified as ‘President of the Republic of Kenya’ on their official verified accounts.

Social media produced a fairytale story, when Microsoft supported an ICT teacher in Ghana, whose photos showing him drawing a word processing window on a blackboard for his pupils, had gone viral in February.

South Africa’s ex-president, Jacob Zuma, has closed the year on a high, after he joined Twitter and other social networking sites in December. The 76-year-old was an instant hit on social media, as he shared video tweets, and busted fake news and accounts associated with him.

This year, Twitter reached out to Africa in more ways than one, appointing ex-Nigerian finance minister Ngozi Okonjo-Iweala to its board and officially recognising Swahili as a language.

Several African governments including Uganda, Zambia and Zimbabwe introduced new regulations for internet users, most of which were called out for restricting freedom of expression.

Uganda in July introduced a 0.5% levy on mobile money transactions, and a 200 shillings ($0.05) daily charge to access social media networks.

Zambia introduced a similar tax in August, charging a 30 Ngwe ($0.1) levy on internet calls over platforms like WhatsApp, Skype and Viber.

Kenya’s president in May signed into law the Computer Misuse and Cybercrimes Bill 2018, which outlaws abuse of people on social media, even as critics warned that it could be exploited to repress civil liberties.

In April, Tanzania’s government approved a law to regulate content posted online, introducing fees of up to $900 for bloggers and online media in addition to policing morals and authenticity of social media users.

Unexplained and repressive internet shutdowns continued to be employed by governments that felt threatened by citizen action.

Users in Sierra Leone, Mali, Ethiopia and Sudan registered restriction of access to social networking sites and online services, during critical moments including elections and protests.

Abiy, who has championed a reformist agenda since taking over office in April, was also responsible for the restoration of telephone services with neighbours Eritrea, following a historic peace deal signed in June.

As part of economic reforms, Abiy’s government hinted that the telecommunications company, could be part of plans to liberalise the economy, opening up the possibiolity of privating the state-owned Ethio Telecom or breaking up its monopoly.

It's official. #BlackPanther has become the most Tweeted-about movie of all time. ?

With 35 million Tweets, fans can't get enough of #Wakanda