Diamond Platinumz banned from performing in Tanzania and abroad 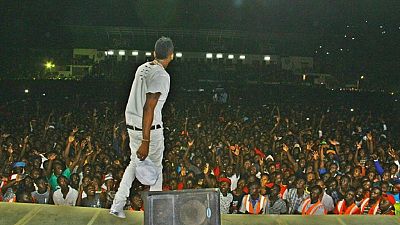 Tanzania’s government has banned the popular musician Diamond Platinumz from staging concerts and conducting any performances in and out of the country.

The body that regulates art in the country, Busata, said they took the decision following Diamond’s defiance of a ban on his song, Mwanza.

Despite the ban on the song, Diamond performed the Mwanza to his fans at a concert on Sunday in the port city of Mwanza.

It is not clear how the Tanzanian authorities will enforce the ban outside the country, where Diamond regularly performs.

Busata also extended the ban to Rayvanny, another Tanzanian musician who is featured on the Mwanza song.

In March this year, Diamond’s songs, Waka and Hallelujah, were also banned by the regulatory authority, on grounds that they are against the country’s norms and values.

The 29-year-old artist was also arrested in April, following the publishing of a video, that showed him playfully kissing a woman. The authorities said the video was deemed to be in breach of the country’s cultural norms.