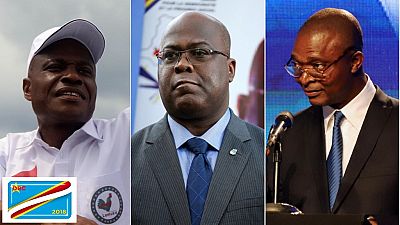 With less than a month to the much anticipated and long delayed presidential polls in Democratic Republic of Congo (DRC), the three frontrunners to replace Joseph Kabila have outlined their manifestos.

All are representing coalitions of political parties: Shadary is the candidate of the ruling Common Front for Congo (FCC) coalition, while Fayulu leads the Lamuku coalition.

Fayulu enjoys the support of opposition heavyweights Jean-Pierre Bemba and Moise Katumbi, both barred from running.

The 62-year-old lawmaker has consistently campaigned against the use of voting machines in December’s polls.

On his return to the country, following the Brussels meeting that anointed him joint opposition candidate, Faulu had a simple message; ‘Every voter’s ballot counts’.

“Our objective is to achieve credible elections, that is elections with paper ballots without voting machines, with a clear and clean electoral list so that the Congolese tomorrow, when they have voted, that the results be in accordance with their vote,” said Fayulu.

Tshisekedi, who is considered the leading candidate ahead of the polls, returned to DRC’s capital Kinshasa on Tuesday, following a historic meeting in Nairobi, where he joined forces with Vital Kamerhe of the Union for the Congolese Nation (UNC).

While Tshisekedi pledged victory, saying their coalition is backed by the people, his counterpart, Kamerhe said they have a ‘winning ticket’.

According to an opinion poll published in late October, Tshisekedi and Kamerhe were leading the pack ahead of the December election with 36% and 17% respectively, followed by Ramazani Shadary (16%).

Shadary, a hardline former interior minister, is one of 15 Congolese individuals under European Union sanctions, accused of human rights violations between December 2016 and early 2018.

He pledged to reinforce the authority of the state, diversify the economy, create jobs, combat poverty and guarantee access to public services.