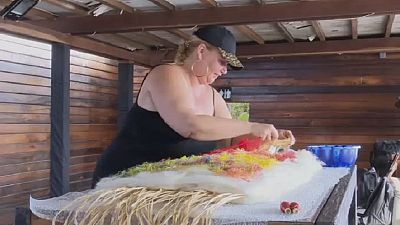 She’s Ghizlane Ouazzani, a Moroccan-French designer who has taken up the task of finding the right balance to produce an ancestral textiles.

Ouazzani uses wool and rafia to pay tribute to Moroccan weavers and the Kongo kingdom in present day Cabinda.

She tells Africanews’ Cedric Lyonnel Sehossolo that this is her way of forging links between the various cultures in Congo, where she recently exhibited her works.

This is the first time I've tested raffia, Congo raffia, we'll see if it works, it's more of a challenge to introduce this famous raffia inside the wool.

“This is the first time I’ve tested raffia, Congo raffia, we’ll see if it works, it’s more of a challenge to introduce this famous raffia inside the wool’‘, Ouazzani said.

Ouazzani organized a workshop for a few friends and design apprentices. Here, she shared her know-how and the techniques involved. She uses water and olive oil soap as her main ingredients. Ouazzani creates the fibre by rubbing.

Participants are in awe of her skills.

Ouazzani was invited by the French Institute of Pointe-noire as part of the Soul Power pre-festival. The event will be held from Thursday November 15 to Saturday 17 in the Republic of the Congo. This Moroccan-French designer showcased some of her projects to the admiration of those gathered.

Sylvie Mavoungou Bayonne is Director of the soul of power festival.

“In fact, Ghizlaine Ouazzani works to design the modern techniques she has learned because she is a designer at the heart of haute couture and she went in search of everything that could represent the centrality of our materials”, Bayonne noted.

The prices of Ghizlane Ouazzani’s artistic works range from $171 to $570.