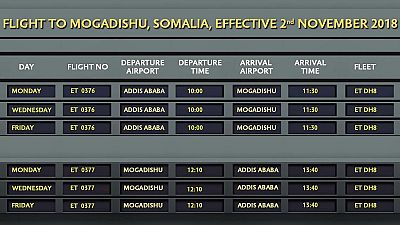 Following the diplomatic breakthroughs sweeping the Horn of Africa region, Ethiopian Airlines announced on Tuesday that it will resume regular flights to Somalia’s capital Mogadishu on Nov. 2, its first in four decades.

One of the biggest carriers in Africa, Ethiopian Airlines suspended its operations in Somalia following the outbreak of hostilities between the neighbours in the late 1970s. Conflict in Somalia which erupted in subsequent decades and continues to the present day has prevented air carriers from returning.

An Islamist militant group has been waging an insurgency in Somalia since 2007.

Our flights will quickly grow to multiple daily flights given the huge volume of traffic between the two sisterly countries and the significant traffic between Somalia and the rest of the world.

“Our flights will quickly grow to multiple daily flights given the huge volume of traffic between the two sisterly countries and the significant traffic between Somalia and the rest of the world,” Tewolde GebreMariam, Ethiopian Airlines’ chief executive, said in a statement.

Turkish Airlines is the only other major international carrier that flies to the country.