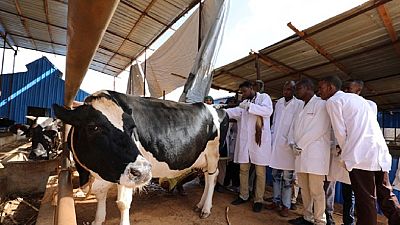 Parts of the country are still plagued by al Qaeda-linked al Shabaab, but a degree of stability in the capital in recent years has begun to attract investment from locals and Somalis living abroad.

Some businessmen see opportunities in the livestock industry, whose mainstay is traditional breeds of cattle, reared by pastoralists, which produce little milk.

We have invested 370 thousand dollars in the business. We invested that amount because we want to revive the dairy industry.

The dairy, two kilometres outside the capital, produces 600 litres of milk daily from 35 cows.

There are 54 dairy cows in total on the property but some are not being milked due to calving.

“The cows could not cope up with weather when they were first brought from abroad. Some of the cows died because they could not endure the climate. After we made much effort, it took the cows one and a half year to become familiar with the climate of Somalia,” said a worker at Som Dairy, Abdullahi Abdirahim.

Som Dairy imported its first cows in 2016 and has become profitable, Dahir said, without providing figures.

Shopkeeper Nuradin Haji Omar buys 20 litres of milk daily from Som Dairy, up from 15 when he began buying from them last year.
“Som Dairy sells me 20 litres of milk at $1.20 dollars per litre. I resell each litre for $1.50. It is good milk and people praise it.

Previously we used to take 15 litres from Som Dairy because the people did not know the milk. Now people know about it we sell about 20 litres,” Omar said.

According to the government’s director of livestock,Mohamed Omar,the venture is one of two local dairies in the country of 14 million people.

The milk is cheaper than camel milk sold by several farms just outside Mogadishu for $2 per litre.

Dahir said Local farmers have been impressed by the new breed of cows in town and several have brought their local herds to crossbreed them with the imported bulls.