From India with love: PM Modi's goodies to Rwanda and Uganda 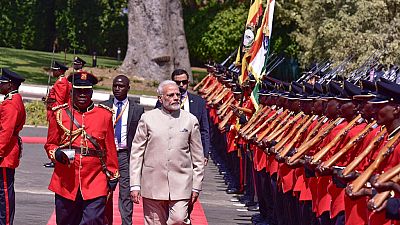 Ahead of the 10th BRICS summit in South Africa, the leaders of India and China, two of the world’s most populous nations and economic powers have been hosted by several of their allies in Africa.

In Uganda, the red carpet was rolled out for Modi who in 2007 visited when he was a minister. He inspected a guard of honor and was entertained by Ugandans who celebrated his elevation to the highest office, in addition to the gifts he came bearing.

India has offered Uganda a total $205 million worth of credit to help the East African country expand its electricity distribution infrastructure and invest in its agriculture sector, which employs majority of its workforce.

A loan of $141 million would be extended to Kampala to build electricity transmission lines and substations while another $64 million would spent on boosting agriculture and diary production, the statement said.

To balance this trade, I have proposed 3 major interventions. First is tourism. We should encourage more Indians to tour Uganda and in the process bring dollars here. To promote this, I have asked His Excellency Modi to allow our revived Uganda Airlines directly fly to Bombay. pic.twitter.com/B1rRN71SPk

The two leaders also discussed ways of reducing the trade imbalance between the two countries and reform of the U.N. security council, according to a statement issued in Kamapala on Tuesday.

‘China relates to Africa as an equal’ – Paul Kagame

Museveni and Modi “reaffirmed the need for a comprehensive reform of the UN Security Council, including its expansion, to make it more representative … and responsive to the geopolitical realities of the 21st century.”

Uganda and India’s relations date back to the 19th Century when Britain shipped a large number of Indians into East Africa to build a railway from the Indian Ocean coast into the hinterland and terminating in Uganda’s west.

In Rwanda, where Modi was making his first state visit, President Paul Kagame and his guest held bilateral talks and signed several agreements including loans and grants worth millions of dollars.

“With India we signed a loan of $100 million for irrigation in three separate areas in the country and $100 million for developing special economic zones,” Rwanda’s minister of finance Uzziel Ndagijimana told Reuters.

Modi also donated 200 cows to families in Bugesera District, Eastern Province, who will received them through the government’s Girinka programme-One Cow per Family, that aims at empowering poor families.

Modi will depart to Johannesburg after the Uganda visit, where he will join the leaders of other emerging economies – Brazil, Russia, China and South Africa for the BRICS Summit.

Uganda together with Togo, Namibia, Rwanda, Senegal, Gabon, Angola and Ethiopia have been invited to the summit as the “Africa outreach segment”