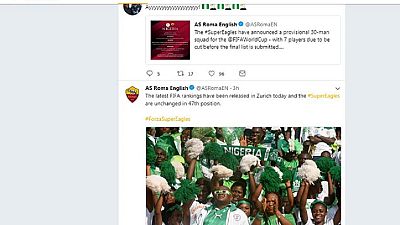 Nigerians on social media are questioning an unlikely link between Italian football club, AS Roma and their national team, the Super Eagles.

‘‘The #SuperEagles have announced a provisional 30-man squad for the @FIFAWorldCup – with 7 players due to be cut before the final list is submitted,’‘ read the AS Roma tweet.

The #SuperEagles have announced a provisional 30-man squad for the FIFAWorldCup - with 7 players due to be cut before the final list is submitted.

Stay tuned for more updates from the NGSuperEagles camp ahead of our opening match against Croatia on June 16.#ForzaSuperEagles pic.twitter.com/N2GhcZ8Kd8

The wording of the tweet which described Nigeria’s opening World Cup match against Croatia as ‘our opening match’ was pointed out by some users as grounds for a potential hack or mistweet by the handler of the AS Roma account.

Connection between Roma and the super eagles???

Recently, the Nigerian ruling party’s official Twitter account was hijacked by a one John McAfee who then used it to sell bitcoin and cryptocurrencies. The party created a new account and eventually succeeded in halting McAfee’s embarrassing social media posts.

It is not however clear whether the AS Roma account could have been hacked. Since the tweet about the Nigeria squad, the account has gone ahead to post another Nigeria related tweet, highlighting the Super Eagles ranking in the latest FIFA World rankings.

The latest FIFA rankings have been released in Zurich today and the #SuperEagles are unchanged in 47th position. #ForzaSuperEagles pic.twitter.com/NsTVMey4qT

Neither the Super Eagles nor the Nigerian Football Federation which were tagged in both tweets have responded.