South Africa police say Zuma could be summoned this week 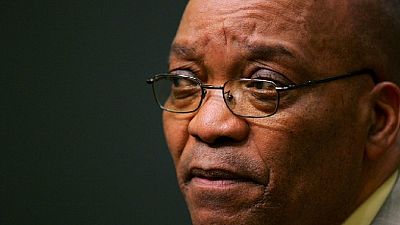 South African police could this week issue former president Jacob Zuma with a court summons relating to corruption charges over a years-old $2.5 billion arms deal, a spokesman for the Hawks investigative crime unit said on Sunday.

The National Prosecuting Authority (NPA) last week said it would seek to prosecute Zuma on 16 charges, including fraud, racketeering, corruption and money laundering.

Zuma could not be reached for comment on Sunday. He has repeatedly denied the allegations. A court appearance would be a dramatic development on a continent where former presidents rarely face their accusers in court.

We are of the view everything will be finalised soon. Hopefully this week.

“We are of the view everything will be finalised soon. Hopefully this week,” Hawks spokesman Hangwani Mulaudzi told Reuters.

News24, citing sources close to the case, reported that Zuma would be summoned to appear in the Durban High Court on April 6. Mulaudzi declined to comment.

Zuma, who was forced to resign by his ruling African National Congress last month, was at the center of a 1990s deal to buy European military kit that has cast a shadow over politics in South Africa for years.

Zuma was deputy president at the time of the arms deal. Schabir Shaikh, his former financial adviser, was found guilty and jailed in 2005 for trying to solicit bribes for Zuma from a French arms company.

The 16 counts were filed against Zuma but then dropped by the NPA shortly before he successfully ran for president in 2009.

Since his election nine years ago, his opponents have fought a lengthy legal battle to have the charges reinstated. Zuma countered with his own legal challenges.