Morocco has joined the race to host the 2026 World Cup. This is the fifth time Morocco is submitting its candidacy to host the event. What makes the recent bid different from the previous ones and how has the news been received in Morocco? Moroccan journalist, Jamal Waalam will tell us more.

Gabonese striker Pierre-Emerick Aubameyang has been voted as highest foreign scorer in the history of German club, Borussia Dortmund helped by the three goals scored during the German cup. This places him ahead of runners-up Swiss player Stéphane Chapuisat.

How is Africa grooming youngsters to shine in football when the opportunity comes? We will take a look at how things are done in Burkina Faso and the Mauritius Island. Watch this week’s edition of Football Planet for more. 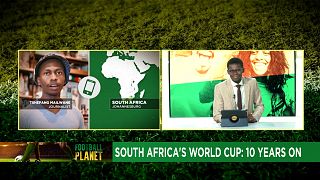 2010 World Cup: What remains of the legacy ten years on?

2010 World Cup: What remains of the legacy ten years on?