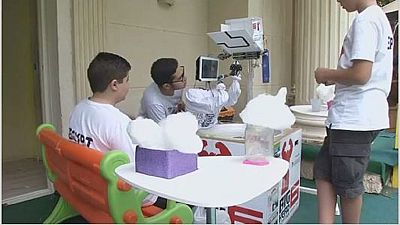 A group of young Egyptian inventors have designed a robot which autonomously makes candy floss.

The team of children, called Egyptian ‘‘Big Hero 6’‘, have won several awards for their robot-building, with their latest invention – the automatic cotton candy-making robot – impressing competition judges and users alike.

“The children have been with me for three and half years, we started with competitions. We participated in one competition after the other and tried to get up to national level. And then we took part in national competitions and they were able to gain some self confidence and see that they can compete with other nations. When they came back three years later, they decided to take part in a project specific to them which is the candy floss project,” founder of the robotics team, Hossam Zayed said.

The team now consists of four school students including founder Zayed’s son – a programmer, a mechanical designer, an electronics designer and a design coordinator.

They meet three days a week after school to build robots and learn everything from programming to mechanical design.

Zayed said the latest invention was formed from an idea to make robots that can independently cook.

“We wanted at the very beginning to create a robot that could help people in the kitchen. So the robot would be able to cook, not people. We found that hard so we did the easiest thing which is making candy floss. So we got the arms and we made the design for it and the design for the board, the electronics and mechanical parts, “ one of the members said.

The team also hope to one day create a robot that can cook a full Egyptian meal.

The team of young engineers have been invited to take part in the prestigious World Maker Faire of New York in September, an annual
U.S. conference which brings together robot designers to showcase their inventions.