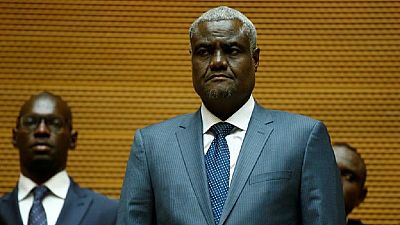 The African Union (AU) has finally spoken on the diplomatic crisis that has hit the Gulf region, where Qatar is suffering isolation from its neighbours who accuse Doha of supporting terrorist groups.

The AU Commission is of the view that members of the Gulf Cooperation Council (GCC) must as a matter of urgency engage each other through dialogue for a speedy resolution to the crisis that started early this month.

A terse statement released on Friday, June 16, 2017 said, the AU chief, Mr. Mahamat Moussa Faki, whiles expressing concern at the development ‘‘underscores that if the rift is not addressed speedily, it could have adverse political, security and humanitarian implications for the Gulf states, the African continent and for international peace and stability.’‘

The security implications for the crisis in the Horn of Africa region is a simmering border tension between Eritrea and Djibouti. Djibouti alleged on Friday that Eritrea had began deployment of troops to a disputed territory in contravention of international law. The area in question was vacated by Qatari forces in the wake of Djibouti’s support for Sausi in the current row.

The diplomatic row started when Bahrain, Saudi Arabia and the United Arab Emirates broke ties with Qatar on June 5.

Ethiopia and Somalia who have called for dialogue to help resolve the impasse, but most African countries have backed Saudi and its allies. Egypt, Mauritania, Senegal, Chad, eastern government of Libya as well as Gabon taken position in Saudi’s camp.

‘‘The Chairperson calls for the urgent resolution of the dispute through dialogue and in this regard calls for a mediated and peaceful solution, including through the efforts of the Government of Kuwait,’‘ the statement concluded.

Guinean president, Alpha Conde who doubles as the President of the AU recently offered to lead mediation efforts into the situation in his capacity as leader of the continental bloc.