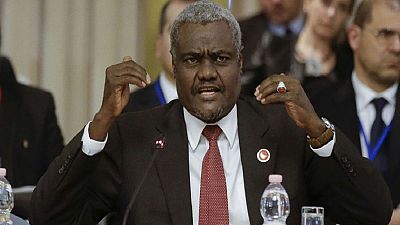 Former Chadian Foreign Minister Moussa Faki Mahamat on Tuesday took office as the chairperson of the African Union (AU) Commission, promising to reform the institution and tackle the continent’s crises.

Faki will be heading the AU executive which is made up of 54 countries, a few days after the United Nations warned that the planet was facing the “worst humanitarian crisis since the end of the second World War” with up to 20 million people including in three African countries namely Somalia, South Sudan and Nigeria facing a risk of malnutrition due to famine.

“The famine that ravages vast areas of Africa these days is a real humiliation for us. The immense potential of our continent and the enviable economic growth rate of many member states of the union leave us no justification of this hideous human tragedy, “Faki said at the AU Commission headquarters in Addis Ababa.

The 56-year-old Chadian was elected in an AU summit held in January. He has been Chad’s foreign minister since 2008.

“Silencing guns and drawing an Africa free from conflict by the year 2020 remains the medium-term objective that will remain imperturbably fixed for me. Giving women and young people their rightful place in the promotion of peace, development and the African renaissance,” said the incoming AU head.

Faki’s election as head of the AU marks a likely refocus by the organisation on issues of peace and security on the continent. The Chadian leader had campaigned on the theme of “development and security”.

In his speech, Faki referred to a report by Rwandan President Paul Kagame recommending AU reforms.

The document calls on the institution to distinguish itself from other regional organizations and focus its efforts on key issues such as politics, peace and security.

“Our administrative procedures must be adapted to the reform requirements as proposed in President Kagame’s illuminating report,” said the new chairman of the AU commission.