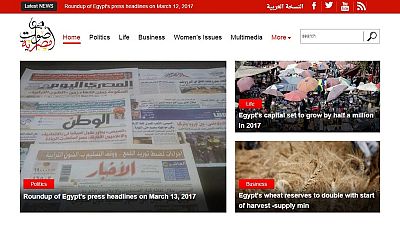 The Thomson Reuters Foundation is closing down the Egyptian news website Aswat Masriya which was set up in October 2011 to serve as an independent news source after the revolution.

The foundation announced over the weekend that due to lack of continued finances, the website will cease to operate after March 31, the website reported.

“Extensive efforts by the Thomson Reuters Foundation to find a sustainable source of financing for the platform in Egypt have unfortunately not been successful,” the report added.

Extensive efforts by the Thomson Reuters Foundation to find a sustainable source of financing for the platform in Egypt have unfortunately not been successful.

The website has provided training for over 300 Egyptian journalists and is one of the leading provider of independent news in Egypt, in both Arabic and English as well as a highlight of news on women’s rights.

“The Aswat Masriya team have been kept consistently informed of the financial challenges and latest developments. The process has been completely transparent and compliant with Egyptian law,” Thomson Reuters Foundation CEO, Monique Villa said.

“We are doing all we can to explore options for keeping the content of the website available to the general public and I am confident this will happen,” she added.

Since its launch, Aswat Masriya has produced over 80,000 text and multimedia stories made free for republication.