<p>At least 60 people have been killed after a church roof collapsed during a bishop’s ordination in Uyo, south-east Nigeria.</p> <p>The local media is reporting the death toll much higher with many people believed to be still trapped under the debris.</p> <p>Hundreds of people were inside the Reigners Bible Church including Akwa Ibom state governor Udom Emmanuel, who survived the disaster.</p> <p>“We have never had such a shocking incident in the history of our dear state,” Emmanuel said on his Facebook page and said they will hold an inquiry to investigate if anyone compromised building standards.</p> <p>Witnesses said the church was still under construction and workers had rushed to complete it for the ordination.</p> <p>President Muhammadu Buhari has expressed “deep sorrow” over the incident.</p> <p>In September 2014, 115 people including 84 South Africans, were killed in Lagos in the collapse of a church belonging to the famous televangelist TB Joshua.</p> 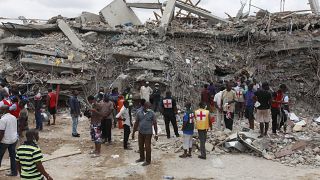