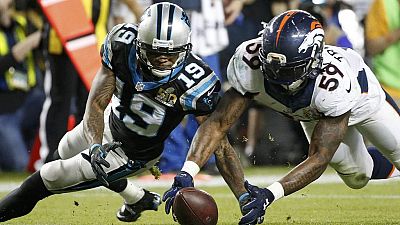 American football players from the National Football League (NFL) recently held training sessions in the Egyptian capital with fans of the sport.

The sessions are part of a training camp organised by American Football Without Barriers (AFWB), a non-profit organisation founded by Breno Giacomini, Gary Barnidge, and Ahmed Awadallah.

“The goal is to set up camps in the United States and internationally every year. The goal is to spread football to different corners of the world. That’s our mission and the next thing is to spread football through a humanitarian cause or a humanitarian message. We constantly work with orphans and underprivileged children or ones who have special needs,” explained Awadallah.

That's basically what it's been since we've been here, that they have everything it takes. They're huge. These guys are ginormous. They have the talent to play anywhere

The stars praised the physicality and dedication of the Egyptian players after five days of a camp that taught them the technicalities of the game.

Pittsburgh Steelers running back, DeAngelo Williams said the players are talented and only need an opportunity to be seen.

“That’s basically what it’s been since we’ve been here, that they have everything it takes. They’re huge. These guys are ginormous. They have the talent to play anywhere. It’s just the fine tuning and the technique and making sure that they are healthy enough and fit to play,” said Williams.

Football is one of the biggest sport in Egypt, but there is an increasing interest in American football according to the co-founder of the Egyptian Federation of American Football, Amr Hebbo.

“Currently in Egypt we are seven teams and there is almost 450 players in our league. In addition to that there is almost six to seven other teams currently being formed in Cairo.

You can say that there is almost 1000 players in Egypt. The numbers are increasing. In this camp, American Football Without Barriers, the number of available spots were 450 and the applications received were three times that number,’‘ he said.

AFWB was founded in 2011. It has held camps in China, Brazil and Turkey.