With the reopening of borders in April 2022, after two years of isolation from the rest of the world, tourism in Madagascar is slowly but surely regaining momentum.

Despite an undeniable attraction for Madagascar as a destination, renowned for its one of a kind biodiversity, heavenly beaches, and favorable weather, the island only welcomed 106 000 tourists between January and November 2022, three times less than pre pandemic.

Reasons for this slow revival can be explained by a lack of services and the soaring prices of plane tickets according to the Confederation of tourism of Madagascar.

Players in the sector hope that the slow resumption will encourage the State to make significant improvements in domestic transport. The lack of domestic flights and increasingly dilapidated roads make access to certain sites very difficult, this is particularly the case for Morondava and its majestic Baobab Alley, in the west of the country.

Madagascar has been awarded the title of "Indian Ocean's Leading Green Destination 2022" by the World Travel Awards in its 29th edition.

The covid-19 pandemic has hugely affected tourism in Madagascar.

In a few figures, the tourism sector is threatened: 44,000 direct jobs and 300,000 indirect jobs according to a report from the Multisectoral Emergency Plan of Madagascar published by the primacy in July 2020.

To revive tourism, associations, travel agencies, parks, etc. are focusing on local tourism, putting ecotourism and community tourism at the heart of their initiatives.

Though community based tourism has been in vogue for quite some time on the island, it is now a crucial step towards the sector’s revival.

As it is generally accepted that in order to be sustainable, tourism activities must contribute to the empowerment of local communities through their active participation in decision-making and in the development process, this form of tourism aims to preserve natural, cultural and social heritage and to ensure the sustainability of biological diversity and not just as an ecological approach. It also implies the participation of tourists and visitors in educational actions to safeguard the island’s unique biodiversity.

According to the community-based ecotourism site in Morondava, "Kivalo Soa Honko", in order for any recovery to be possible, material reinforcements such as water supply and public transportation are absolutely needed. 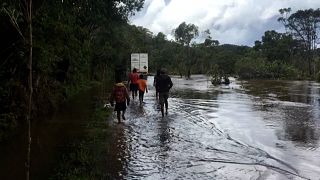 In Madagascar, roads are damaged and cities ravaged after the passage of cyclone Bastsirai

In Madagascar, roads are damaged and cities ravaged after the passage of cyclone Bastsirai