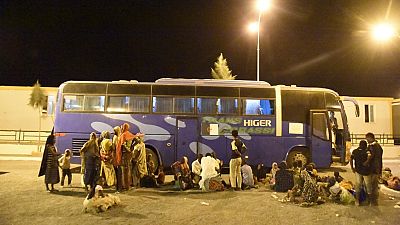 Some 847 migrants, mostly Nigeriens, have arrived in northern Niger after being turned back from Algeria, AFP learned Thursday from local authorities.

"Regarding the situation of the returnees from Algeria, we have a total of 847 people including 40 women and 74 unaccompanied children. These people have already arrived in Agadez

The 74 unaccompanied children "are already being taken care of" by the services of the Ministry of Child Protection, it said.

A humanitarian source confirmed to AFP the arrival earlier this week in Niger of "some 800 migrants" after their expulsion by the Algerian authorities who "escorted them to the Nigerian border".

These people will be able to receive medical care and basic necessities, she said.

Algeria has expelled tens of thousands of irregular migrants from West and Central Africa since 2014, according to the United Nations.

"I was with others (children) at the home of a lady to whom we paid every day what we earned begging. She told me that she sent this money to my mother every month," Sahabi, a Nigerien child sent back to Agadez in June after being arrested by the police in Algiers where he was begging, told UNICEF.

Some of these migrants are trying to survive in Algeria, but many are mainly trying to reach Europe.

Algerian and international NGOs have often accused the authorities in Algiers of arbitrarily arresting and collectively deporting sub-Saharan Africans, sometimes leaving them without food or water in the desert.

Algeria, which has no asylum legislation, regularly denies these accusations, denouncing a "malicious campaign.