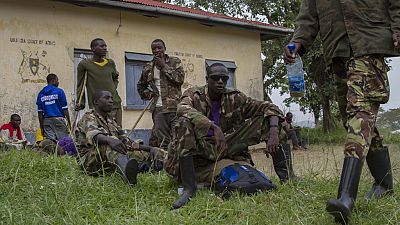 Clashes have broken out in the eastern Democratic Republic of Congo between its military and M23 rebels, the rebel movement's spokesperson has said.

This comes a day after a bilateral agreement to de-escalate diplomatic tensions over the rebellion.

"We are Congolese, not Rwandans. If there is a ceasefire, it can only be between us and the Congolese government," said Willy Ngoma, spokesman for the M23, a movement whose resurgence in eastern DRC has led to current tensions between the DRC and Rwanda.

According to sources interviewed from Goma, the capital of North Kivu, new clashes on Thursday morning pitted the DRC armed forces (FARDC) against M23 rebels, who seized a town in Rutshuru territory, Kanyabusoro.

A FARDC commander accused the rebels of attacking the soldiers there, violating the ceasefire announced the day before, which the M23 denied, accusing the army of shooting it in return.

DRC, Rwanda agree to de-escalate tensions at a mini-summit in Luanda https://t.co/Dw8ah6hzi2

The M23, for "March 23 Movement", is a former Tutsi-dominated rebellion that was defeated in 2013 and took up arms again late last year, blaming Kinshasa for not respecting agreements on the demobilisation and reintegration of its fighters. Kinshasa accuses Kigali of supporting this rebellion, which Rwanda disputes.

A mediation meeting between the presidents of Rwanda and the DRC was held on Wednesday in Luanda under Angolan President Joao Lourenço. "I am pleased to announce that we have obtained positive results insofar as we have agreed on a ceasefire," he said at the end of the meeting.

Just before, the DRC presidency had announced that Felix Tshisekedi and Paul Kagame had agreed on a "de-escalation process", adding that a "roadmap" had been adopted, including "the immediate cessation of hostilities" and "the immediate and unconditional withdrawal of M23 from its positions in the DRC".

"This roadmap does not commit the M23," said Willy Ngoma, speaking from Goma. "We are Congolese, we have nothing to do with Rwanda," he insisted, "we are asked to leave here, but to go where? It is impossible.