These men in make-up and wigs are members of the Moroccan all-male "Kabareh Cheikhats" troupe. The group includes singers, actors and dancers who intend to give a new take on old traditions.

They’re singing Aita, a musical genre that has long been popular in the countryside and played a key role during the colonial years. Since the songs were expressed in dialects the colonial authorities could not understand it.

Whenever the Kabareh Cheikhats takes the stage in this Rabat theatre, the comedic tone of the boisterous performance and naustalgia the gather a large audience.

"Kabareh Cheikhats" is all about fun, there are between nine and ten men, sometimes even 18, Ghassan El Hakim, the founder of the group "Kabareh Cheikhats" recounts. The audience also steps onto the stage. It's a realistic show, where there are men playing the role of Cheikhats in front of people who know the show (of traditional Moroccan cheikhate) well."

Men and women from the audience dance in the aisles to Aita songs from Morocco's mountainous north, its former capital Fez or from the Doukkala-Abda plains that are the music's heartland.

If the lyrics narrate traditional life and describe the Kingdom's nature, it also unapologetically evoke topics such as love and sex. This transgressive aspect also inspired the founder of the troupe to resurrecting the musical art. "It's a show that doesn't follow classic theatrical codes. There are men who disguise themselves live, as Cheikhats. Today, I can choose to be the "Tabaa" Cheikhate, or Amine can choose to be the "Tabaa" Cheikhate, or I could just lead the rhythm and become a conductor, leading the music."

The Kabareh Cheikhats promotes appreciation for the Aita heritage but it doesn't protect its actors from experiencing online condamnation. Some internet users don't like for the art that was once dominated by women to be passed onto men.

So, six years after the troupe was born, the actors continue to teach that seeing men cheikhate is not totally new to Morocco. Najmi said men used to dress up as cheikhates at weddings.

"In the show we invented nothing, Amine Naouni explains. All we do is revisit things that already existed in society. It reminds people, by telling them: your parents and grand parents used to dance like these people, within the appropriate context [...] They worked, took care of their children and families... But whenever they had the chance, they came for fun, joy, for learning; people used to learn from the Cheikhats through conversation."

The songs had gained royal recognition in the late 19th century, under Sultan Hassan I. Famous female "cheikhate" singers were invited to parties and national ceremonies up until the 1990s. But social and cultural changes in Morocco -- including a shift among some to more conservative religious values -- knocked them off their pedestal.

"They became symbols of debauchery," said Najmi. "This contempt is the fruit of hypocrisy and double-talk of a segment of society."

Amine Naouni, one of the troupe's actors, said Kabareh Cheikhats unapologetically pays tribute to the "strong women" of the past.

The new heirs of Aita have put up a show that challenges gender norms and that enables a centuries-old song to live on. 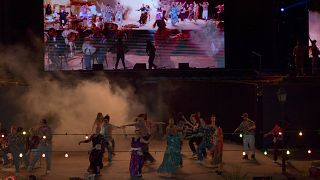