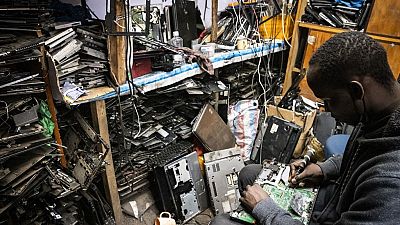 Here, their only mission is to gather electronics which they sell to the few Kenyan companies that recycle these products.

For as little as 500 shillings a day (less than €4), these men in T-shirts and flip-flops are on the front line of a battle against a growing threat to the environment.

Obsolete or broken, discarded electronics have become a global scourge. According to the UN, the electronics industry is generating waste at a faster rate than any other sector, including textiles and plastics.

Long flooded by e-waste from Europe and Asia, Africa is now also faced with huge volumes generated locally by the smartphone, computer, and appliance frenzy.

In Kenya, four companies - Sintmund Group, WEEE Center, Sinomet Kenya and Electronic Waste Initiative Kenya (E-WIK) - are trying to stem this electronic tide by extending the life of these products.

At E-WIK's premises in Nairobi, dozens of employees carefully dismantle motherboards, batteries, screens, and cables, which will be reassembled into laptops and resold.

"When you have a working computer motherboard, you look for a power supply and from there you start assembling other components," explains George Kimani, president of E-WIK and a former car mechanic.

In addition to buying the waste from waste collectors, E-WIK also collects discarded electronics from individuals and companies.

"I'm so happy they're taking them away," says the reserve's ranch manager, as E-WIK employees load her items onto a truck.

"We are a nature reserve. It's important for me, and for all of us here, to know that the waste is disposed of responsibly, (...) that it won't end up in a river or pollute wilderness areas," she says.

The market for refurbished appliances - whose prices defy all competition - is huge in Kenya, where 36% of the population was living in poverty in 2020, according to a government report.

Nicole Awuor, a 28-year-old baker, has already bought a recycled microwave and mobile phone. For one reason, she says: "It's cheaper and it's often within your budget.

E-WIK's most expensive laptop costs 15,000 shillings (118 euros), a pittance compared to a new model with similar features. "There is a market. We give them the guarantee that if it doesn't work properly, they can always come back to us," says Kimani.

But these initiatives are insufficient in the face of the scale of the task.

With only four licensed recycling companies in this country of nearly 50 million people, East Africa's economic powerhouse, most waste often ends up in landfills where it releases lead, mercury and other toxic substances.

The volume of e-waste collected or recycled "is not counted and most" ends up in Dandora, a landfill the size of 20 football fields in eastern Nairobi, the environment ministry conceded in 2020.

In addition, companies like E-WIK lack the technology to extract precious metals and rare minerals, such as cobalt, from the collected waste and thus lose the opportunity to recycle valuable raw materials.

Kenya, whose lucrative tourism sector relies on the preservation of its natural parks and beach paradises, regularly hammers home its determination to protect the environment.

But rather than being driven by the state, existing recycling initiatives are primarily "poverty-driven", says Richard Kainika, secretary-general of the Kenya Waste Recyclers Association. "Garbage collectors would not collect this waste if it did not have immediate tangible value".

Recyclers also point to the difficulties of reusing newer products, whose soldered components are harder to dismantle and more complicated to repair.

"I like old TV sets. They are more (easily) salvageable," says Peter Mutonga, an employee at E-WIK: "On newer models, one little problem and they are ruined." 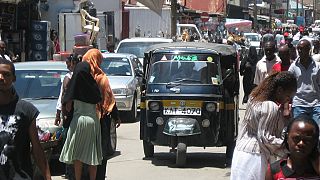 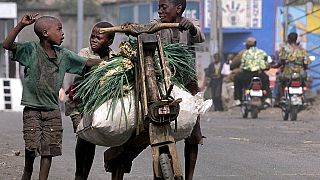