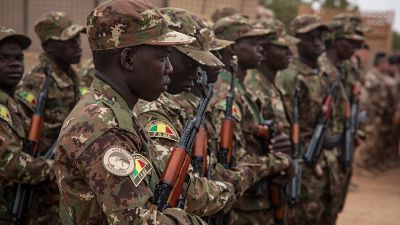 New accounts have emerged of Malian troops and suspected Russian mercenaries killing about 300 people in a town in Mali's central region.

In a statement released on Tuesday, rights group Human Rights Watch (HRW) said there had been a "deliberate slaughter" of people detained in the central town of Moura.

HRW described Moura as being under the "quasi-control" of al-Qaeda in the Islamic Maghreb (Aqim). It quoted a local as saying some of those killed "were really jihadists" but that "many others were killed simply because they had been forced by the same jihadists to cut their pants and grow their beards".

Mali's military admitted on Saturday that it had killed more than 200 militants in a "large-scale" assault on the "terrorist fief" of Moura.

They also claimed to have arrested about fifty militants, but many local and humanitarian sources, both Malian and international, have denounced the killings calling it an execution of civilians.

The United Nations mission in the sahelian nation MINUSMA has said it is still waiting for authorization from the transitional authorities to launch its fact-finding mission in Moura.