Ugandan satirical writer and government critic Kakwenza Rukirabashaija, charged with 'offensive communication', appeared in court Monday to apply to move his case to a high court and for his passport to be returned so he can travel to Kenya for medical treatment.

The 33-year old Kakwenza was arrested in December after posting critical comments on twitter about President Yoweri Museveni and his powerful son Muhoozi Kainerugaba.

The court rejected both requests, setting a trial date for March 23

"We had requested the magistrate to release his passport, which requests he has rejected for the reason that they want to start trial very soon. We have also prayed that they refer the matter to the high court or nullify it, which request was also rejected," said Eron Kiiza, the lawyer for Kakwenza Rukirabashaija.

Kakwenza’s lawyer had previously alleged that he was illegally detained by military intelligence officers and special forces soldiers and subject to torture by the Prison Services. 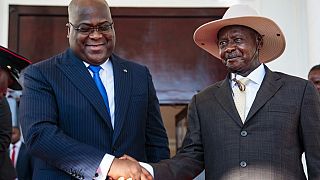