In Kinshasa’s zoological garden it is time for a much needed makeover. Eight decades after it first opened, Congolese authorities have promised to renovate the site where families and pupils come.

A dozen monkeys, crocodiles or two bulls: at the Kinshasa zoological garden, the few visitors express their disappointment at the absence of emblematic species in this attraction site in the capital of the Democratic Republic of Congo. "We came to visit the zoo, unfortunately they don't have many animals, they really don't, only monkeys", tourist Aïcha Diasilvi laments.  For the magic to happen, Congolese authorities have promised to renovate this site and to welcome more wild animals.

The zoological garden extends about 8 hectares in Kinshasa. Visitors can see a few birds and snakes. They can also come across Simon and Antoinette, crocodiles from the Nile.

Since the covid outbreak hit, the zoo attendance has declined, but the director of the zoo- who lived the heydays of the site- hopes the makeover will attract visitors back.

"There were as many as five thousand specimens and more than a thousand species, Simon Dinganga Tra Ndeto recalls.With independence and the departure of those who created the zoo, the number of specimens began to decline.** Over time, animals aged and there was no repopulation of this zoo. The number has continued to dwindle but with the zoo makeover(ed, of the zoo), as soon as we have finished repairing cages, redoing the space, we will repopulate it.**"

The renovation of the zoo was launched last July by Tourism minister Modero Nsimba. But since the work progresses slowly many Congelese prefer to head east in order to visit a reserve built by former president Joseph Kabila which displays different species. 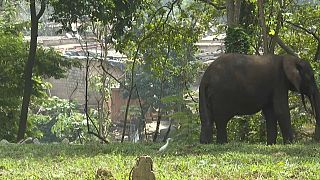 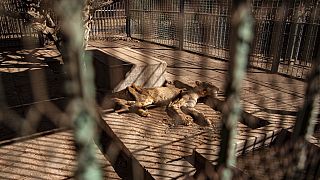