Sea level rise caused by global warming is threatening a bay on the west coast of Congo, located 20 kilometres north of Pointe-Noire.

Loango Bay, once home to an important slave trading post, is at risk of washing away - along with its important history. Loango bay is exposed to the powerful, open waters and currents of the Atlantic Ocean.

The local community is worried their past could disappear with it.

"I see how the sea advances, it breaks everything. Even the tombs up there are no longer there, everything has gone ."

Mango trees grew along the "Slave Route," during the slavery era. Only three of the original trees survived. To make sure that this powerful symbol of slave trade doesn't die, a project called Matatchebo is cloning the remaining trees.

"We are cloning these mango trees, so that we can continue the memory of the two million slaves who have passed through this bay, through each mango tree that we will clone and distribute all over the world."

Today, the historic site has fallen into disrepair and attracts only a few tourists a year. Kimfoko Madoungou, a local historian, is urging authorities to act.

"When you want to develop a site, you need material and human resources, but what if the material means are lacking in the first place, what about the human resources? They (the authorities) come to the site, they speak and they speak, make announcements and then they leave. But during this time, the erosion continues to advance."

In Loango Bay, one of the main embarking points, the route along which enslaved people were bought and sold and marched to waiting ships is still visible today, known as the "Slave Route." 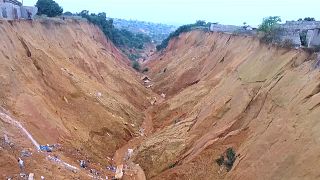