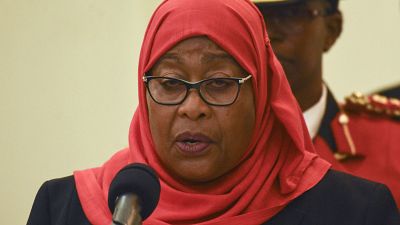 She expressed her disappointment to the parliament who in several sittings discussed her differences with the former president, who died on 17th March, instead of focusing on the government agenda.

She said she was wary of what was trending on social media depicting MPs discussing her just began tenure in comparison with the former leader.

“It is rather bizarre that something that is trending on social media is what now guides the debate in parliament," she said.

"We are supposed to be discussing and passing the government budgets...Let's work the way parliament is supposed to," she said.

Meanwhile, President Suluhu on Sunday formed a committee of experts that will advise her on the status of Covid-19 in the country and possible steps to be taken to control the pandemic.

She spoke during a prayer meeting on Sunday, acknowledging that the disease had evolved and that a new variant had been reported in many parts of the world.

“Let me promise that I will frequently provide new updates on the disease from the committee in order to save the country from losing significant manpower and protect those in danger of contracting the disease,” she said.

Magufuli's legacy was marred by his Covid denialism, which saw Tanzania refuse to issue data or take any measures to curb the spread of the virus.

Analysts had predicted that Suluhu will face early pressure from powerful Magufuli allies within the party, who dominate intelligence and other critical aspects of government, and would try and steer her decisions and agenda.

"For those who were kind of expecting a breakaway from the Magufuli way of things I would say hold your breath at the moment," said Thabit Jacob, a researcher at the Roskilde University in Denmark and an expert on Tanzania.

"I think she will struggle to build her own base... We shouldn't expect major changes."

Hassan's loyalty to Magufuli, nicknamed the "Bulldozer" for his no-nonsense attitude, was called into doubt in 2016.

Her office was forced to issue a statement denying she had resigned as rumors of a rift grew more persistent, and Hassan hinted at the controversy in a public speech last year.

"When you started working as president, many of us did not understand what you actually wanted. We did not know your direction. But today we all know your ambitions about Tanzania's development," she said in front of Magufuli.