The head of the Suez Canal Authority on Thursday praised the salvage team who worked to free the colossal container ship wedged in the canal at a ceremony in Ismailia.

Lieutenant General Osama Rabie told the team that it was "a miracle" the Ever Given vessel was unblocked.

"There were skeptics that we would be able to save this ship because they were asking the experts in the world and they told them that the issue was very difficult, of course because the ship was 223,000 tons, with 13,000 containers and its length was 400 meters (1,300 ft) and the place in which it was in the canal is 250 meters wide (820 ft). Which you did and you achieved, it is a miracle," said Rabie.

Dredging head of the Mashhour vessel, the main ship working for the Suez Canal authority, told The Associated Press that he was afraid of hitting the vessel from below.

"The danger that I was afraid of was if the rig hit the boat from below, because it was possible to make a hole in the boat and sink it," Ahmed Mahmoud said.

For six days the Panama-flagged vessel blocked a crucial artery of global shipping after it crashed into the bank of the canal.

During those six days, Ahmed Mahmoud and two captains were among a team who worked around the clock to dislodge the ship.

The blockage had halted billions of dollars a day in maritime commerce.

The vessel is now anchored in the Great Bitter Lake, a wide stretch of water halfway between the north and south ends of the canal. 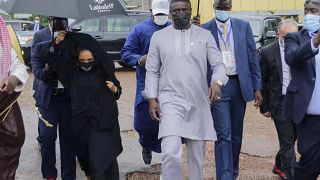