Algerian President Abdelmadjid Tebboune called for the dissolution of parliament and early legislative elections on Thursday. In an address to the nation, the Head of State expressed his decision to carry out ministerial reshuffle within 48 hours at most.

"I have decided to dissolve the National People's Assembly to call for elections that are free of money, whether it comes from corruption or not, and to open the doors to young people."

Tebboune also announced an amnesty for dozens of jailed activists of the 'Hirak' protest movement — which swept former strongman Abdelaziz Bouteflika from power in 2019.

The leader stated that around 30 members will be granted a presidential pardon.

"I decided to grant presidential pardon to about thirty people, for whom a decision had been given and others for whom no verdict had been reached. Between 55 and 60 people will be joining their families from this evening or tomorrow."

Tebboune, who has previously expressed dissatisfaction with the cabinet of Prime Minister Abdelaziz Djerad, made the announcements as the North African nation’s government faces multiple challenges — political and economic crises compounded by the unprecedented COVID-19 pandemic. 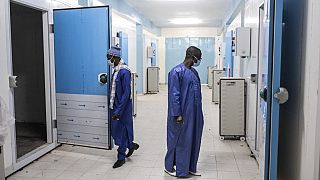