The question remains.- What happened on Sunday near Douentza, in central Mali in the midst of security turmoil? The French army says its planes wiped out dozens of jihadists while villagers report the death of several civilians in a strike by an unidentified helicopter.

Messages have proliferated on social networks since Sunday about the events in the village of Bounti, in this Malian center which is one of the main hotbeds of violence in the Sahel.

Malian authorities have been silent and the little details shared by the French anti-jihadist force Barkhane has left the field open to a flood of speculation, difficult to verify in a remote area whose access is made very complicated by the strong presence of jihadists.

But only the national army and Barkhane can operate offensively in the Malian sky.

Tabital Pulakuu, an association for the promotion of the culture of the Peule ethnic group, reported first of an "air strike (that) cost the lives of at least twenty civilians" during a wedding. Testimonies of villagers collected by AFP have accredited this story.

On Tuesday,  a member of the French army gave an account. "A patrol of fighter planes struck west of Hombori a gathering of jihadists previously spotted after an intelligence operation of several days. It "neutralized" several dozen of them", the staff explained.

The behavior of the individuals, their equipment and the cross-checking of intelligence exclude anything other than a jihadist gathering that Operation Barkhane strikes regularly, he said. "There can be no doubt and no ambiguity: there was no marriage," the French military official stressed.

But villagers reached on the spot deliver another version. It differs so much and the paucity of information is such that, among the many conjectures, the hypothesis of concomitant events in the same area cannot be totally excluded.

It "was a lifesaver. I found myself in the bush but I lost two brothers," said Ahmadou Ghana. "The helicopter was flying so low that we thought it was going to fly over the village," said another villager, Mady Dicko.

Since Sunday, "we have not seen any representative of the authorities. So, this morning, we dug a pit to put the bodies, which have been there since Sunday without anyone touching them," said Mady Dicko.

The bodies "are not identifiable, they are body remains, pieces of human bodies scattered around," reported another villager, Hamdoun Baouro Sy. "We would like the authorities to at least come and tell us who owns the helicopter that killed our parents".

Solicited on numerous occasions, the Malian authorities, dominated by the military since the putsch of August 18, have remained silent.

The UN force (Minusma) has stated that it was "not involved in the recent events in the Bounti zone. "The human rights division of Minusma has initiated an investigation," a spokesman said.

The events in Bounti are a new manifestation of the harshness of the Sahelian theater of conflict. On Saturday, one hundred civilians were killed in two villages in western Niger in what is considered the deadliest jihadist attack on non-belligerents in the Sahel.

France has just lost five soldiers killed in Mali by improvised explosive devices in quick succession. It is currently reviewing the evolution of its ongoing engagement since 2013 in the Sahel, where it is deploying 5,100 soldiers.

As for the soldiers who seized power in August in Bamako and promised to return it to civilians, they must show that they are capable of stopping the descent into hell that has been going on for years.

The region of Mopti, where Bounti is located, some 600 kilometers from Bamako, is one of the main hotbeds of violence that erupted in the north in 2012. Since then, armed groups, starting with that of the radical Peul imam Amadou Koufa affiliated to Al Qaeda, have taken root.

The violence has however now taken on a more communal character, especially between Dogon and Peul, who are often assimilated to jihadists.

In addition to this, the Malian security forces have been reported to have also committed acts of violence against civilians.

Violence in the Sahel has resulted in thousands of deaths since 2012. 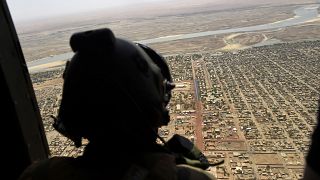