Anger continues to flare in the Arab world after French President Emmanuel Macron's public backing of the Muhammad caricatures.

In Tunisia, dozens gathered in the heart of the capital as the Muslim world celebrates the birth of the Prophet during the "Mawlid al-Nabawi" holiday.

They gathered on Avenue de Paris, in Tunis, but were surrounded by police and were unable to access Avenue Habib Bourguiba, the main artery of the city centre, where the French Embassy in Tunisia is located.

The anti-Macron sentiment was echoed in Libya.

"As you see here, the Arab countries are a little bit angry because of what happened: the caricatures and the story behind the Prophet Mohammed," said Sarah Mubarak, a resident in Tripoli.

"We just need the respect back, we need Macron and the people to respect our Prophet because we love him so much."

The French President strongly defended secular values after the French schoolteacher Samuel Paty was murdered after he showed his class drawings of the Prophet Muhammad during a class on free speech.

Macron promised France would not “renounce the caricatures”, following the killing.

But the Arab world reacted strongly on social media and geopolitical tensions rose after Turkish President Recep Tayyip Erdoğan called for a boycott of French products.

France recalled its ambassador in Ankara following the spat.

France's foreign ministry said calls for a boycott of its products and the “occasionally hateful” protests against the country must end.

“These calls distort the positions defended by France in favour of freedom of conscience, freedom of expression, freedom of religion and the refusal of any call to hatred,” the ministry said in a statement.

“Consequently, the calls for boycott are pointless and must cease immediately, as must all attacks against our country, instrumentalised by a radical minority.”

In French, Arabic and English, Macron said on Twitter "We do not accept hate speech and defend reasonable debate. 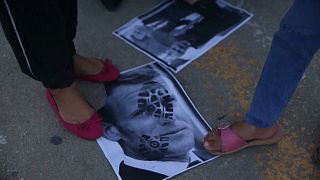 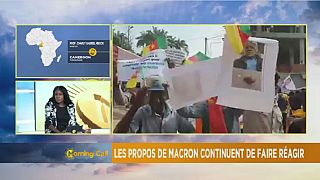