Cameroon is protesting criticism from French President Emmanuel Macron over the handling of the conflict in its English-speaking regions. More than 100 mainly young people rallied in front of the French Embassy in Yaounde, on Monday, demanding an apology from the French leader.

The protesters carrying placards denied accusations they were organized or paid by the Cameroonian government. So, what is their grouse?

On Saturday, President Macron described the human rights situation in Cameroon as “intolerable.” He was responding to a Cameroonian activists question about 22 civilians killed this month in the separatist conflict. Many witnesses accuse gunmen in military uniforms to have launched the raid on the village on Feb 14, killing women and children. 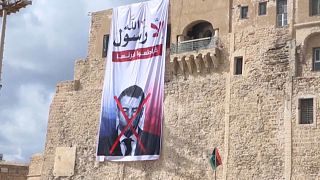