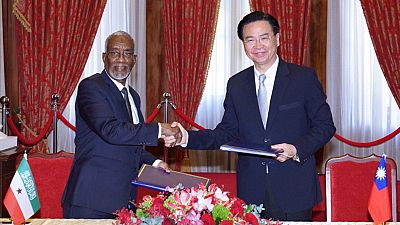 Taiwan and Somaliland, Somalia’s northern autonomous region, have agreed to boost diplomatic relations between them. The main feature being the opening of Representative Offices in their respective capitals.

“We’ve signed an agreement with Somaliland to establish good relations. A Taiwan Representative Office will be set up in this independent country on the Horn of Africa. We’re thousands of miles apart, but share a deep-seated love of freedom & democracy,” Taiwan’s Foreign Minister Joseph Wu said.

His comment posted on Twitter came as Somaliland confirmed that in February this year, Foreign Affairs and International Cooperation Minister, Yasin Hagi Mohamoud paid a four-day official visit to Taipei.

“The main purpose of the visit was to sign Somaliland-Taiwan diplomatic agreement and to establish new political and economic relations,” the Ministry added.

Wu disclosed that Taiwan’s contacts with Somaliland dated back to 2009. He defended the opening of representative offices saying that eight other nations or international bodies had such offices in Somaliland, including Ethiopia.

“I think what we are doing is not much different from other countries,” Wu said. “In essence, Somaliland is an independent country.” A claim Somalia has routinely rejected even cut diplomatic ties over, when Guinea accorded visiting Somaliland president presidential courtesies.

Chinese embassy in Mogadishu reacts: Only one China in the world

In a statement posted on its Twitter handle, the Chinese Embassy in Somalia stressed the indivisibility of China. In a series of posts that mentioned Taiwan but did not mention Somaliland.

“We will never allow anyone, any organization or any political party to separate any piece of territory from China at any time or in any form. Taiwan is an inalienable part of China.

There is only one China in the world. Taiwan is a part of China and the government of PRC is the sole legal government representing the whole of China.#Somalia#COVID-19 pic.twitter.com/xOLYpidAG0

Taiwan’s diplomatic reach extends to a little over a dozen countries globally because of pressure from China. Beijing considers the island to be its territory and has succeeded in getting all African countries except eSwatini to sever ties with Taiwan.

Formerly a British protectorate, Somaliland merged with former Italian Somaliland in 1960 to create Somalia. But it declared itself independent in 1991 as Somalia plunged into chaos after the fall of the Siad Barre regime.

Somaliland has been pushing for independence ever since. It has its own government based in the self-appointed capital of Hargeisa, its own army and prints its own currency. It is regarded by the international community as an autonomous region of Somalia and not a sovereign state.

On Twitter, Taiwanese president Tsai Ing-wen expressed great pleasure meeting with the Somaliland Foreign Minister earlier this year. She stressed that both sides were working to build bilateral ties refering to Somaliland as a country in the process.

For his part, Somaliland president Muse Bihi Abdi quoted Ing-wen’s tweet thanking Taiwan for the warm welcome before adding: “Excellency, as you expressed, the bilateral relationship of Somaliland and Taiwan is built upon shared values & mutual respect. Our Representative Office will be opened soon in Taiwan.”

Republic of Somaliland & its delegation are grateful for your warm welcome earlier in Taiwan. Excellency, as you expressed, the bilateral relationship of #Somaliland and #Taiwan is built upon shared values & mutual respect. Our Representative Office will be opened soon in Taiwan. https://t.co/pu618ZlDE7