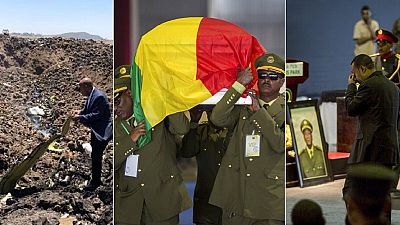 Deaths run through Ethiopia’s 2019 news calendar from varsity campuses, to the streets in Oromia and Addis Ababa.

The assassinations of Amhara state officials and connected deaths in Addis Ababa that claimed the life of the army chief Seare Mekonnen brought shock to Ethiopians.

But by far the one incident that affected the world at large, was the the Ethiopian crash in Bishoftu in March 2019 where over 150 people aboard a Boeing jet perished whiles headed to the Kenyan capital, Nairobi.

Our review of the year looks back at incidents that wreaked havoc and caused pain in Ethiopia, a concluding part to an earlier piece that assessed what went well for Africa’s second most populous nation.

Africa and the world joined Ethiopia to mourn one of Africa’s worst aviation disasters in recent years. On March 10, the Ethiopian Airlines Boeing 737 Max crashed in the town of Bishoftu in Ethiopia’s Oromia region.

The crashed hogged the news headlines across the world due to its implications on the world biggest plane manufacturer. Till date issues around the crash continue to ripple with the most recent being the firing of Boeing’s chief executive officer when the crash occured.

Some key points from the crash were as follows:

1 – All aboard killed
2 – Boeing 737 MAX 8s grounded worldwide
3 – Black boxes flown to Paris for analyses
4 – Burial ceremony was held in Addis Ababa
5 – Preliminary report found that: Aircraft passed airworthiness test before takeoff, Crew properly licensed to operate the flight, Takeoff was normal and all Boeing procedures were used but the crew was unable to control the flight
6 – Twin safety recommendation to Boeing was to review of flight control system, review should be adequately vetted before planes allowed back in the skies.
7 – US lawmakers called a hearing over the incident
8 – Ethiopia announced a deal with Airbus with all defective Boeings grounded
9 – Boeing admitted errors, vowed robust response
10 – CEO of aircraft at time of crash fired in December

In June, the federal government reported that a coup in the Amhara regional State had been foiled but the incident left in its wake deaths and mass arrests.

Months on, in November, the attorney general said 68 people who took part in a June attack that killed then Ethiopian army chief Seare Mekonnen and top leadership of Amhara regional state were to be charged.

A soldier was arrested for being the brain behind the assassinations in Addis Ababa whiles the head of Amhara region’s security, believed to be the mastermind of the coup, was killed in a shootout with security forces in Bahir Dar.

Local media outlets reported that the Attorney General Berhanu Tsegaye said material exhibits and technical evidences had been collected against the accused persons.

He added that of the 68, 55 were from Bahir Dar – where the main attack was carried out – and 13 were from Addis Ababa, where the army chief and a retired general working to thwart the incidents in Bahir Dar were also killed.

His announcement on social media triggered protests that led to deaths across Oromia. “Protesters burnt copies of Medemer – a book authored by Abiy”:https://www.bbc.com/news/world-africa-50157385?ocid=socialflow_twitter and vowed allegiance to Jawar. Arrests were made and prosecution is expected.

Jawar has since announced his candidature for elections slated for later this year. He recently announced joing the Oromo Federalist Congress, OFC, led by veteran politician Merera Gudina.

In July, at least 17 people were killed in clashes between Ethiopian security forces and activists seeking a new autonomous region for their Sidama ethnic group.

A local district official told Reuters at the time that at least 13 people were killed in a town near Hawassa city, 275 kms from the capital Addis Ababa, while hospital authorities added later that four protesters had died of gunshot wounds in the city itself.

A referendum was scheduled for November with over 98% of voters choosing the “YES” option in which case Ethiopia will be having its 10th regional state.

Deaths in attack on religious places

In the wake of the Abiy- Jawar showdown, the Orthodox Church slammed the government for failing to protect citizens. The Church said it had lost scores of its members in the chaos.

Ethiopia’s Inter-Religious Council in December tasked the government to work with communities in order to protect religious institutions, following arson attacks on four mosques in the Amhara region.

The religious leaders called on Ethiopians to help rebuild the mosques and businesses that were burned down in the Mota town, even as inter-communal and ethnic violence threaten political reforms initiated by Prime Minister Abiy Ahmed.

Amhara’s regional spokesperson, Getnet Yirsaw said at the time that five people suspected of burning down four mosques had been arrested. Protests were held to condemn the violence.

Authorities admitted a security challenge across a number of universities where ethnically-tinged attacks were causing loss of lives. In November alone, three university students died in days of unrest largely along ethnic lines.

The government later deployed federal forces to enforce security across the campuses. At a point the Prime Minister was forced to warn that varsities could be closed if push comes to shove.

Students were at a point evacuated from some varsities. More recently a university in Dire Dawa suspended teaching and learning after a student died, the Addis Standard reported.

Education ministry official Samuel Kifle is on record to have said that people behind the unrest had fake student IDs and arrests were underway.

Internet connectivity was cut in Ethiopia at least twice this year as per our reportage. The first had to do with national examinations. Government did not formally announce the move but it was implemented as had been the case in the last few years.

Connection was restored after eight days, with the state telecom monopoly officially acknowledging the service disruption in a social media post. They also offered an apology to customers.

In a statement on 18 June, 2019, Ethio Telecom said: “We sincerely extend our apologies to our customers for the inconvenience occured.” A statement that was preceded by an admission that since June 10, internet service had been interrupted intermittently.

The operator had been mute since the disruption was reported by internet rights groups and social media users across the country – Africa’s second most populous nation.

The second instance was allied to the failed coup in Amhara region in late June 2019. Service was restored after 100 hours of outage, online rights group, NetBlocks said at the time.

“Internet access is being restored across Ethiopia as of 6:00 a.m. UTC Thursday 27 June according to network measurement data. Current levels are approaching 90% of normal connectivity levels prior to the disruption,” NetBlocks confirmed.

It was in the wake of the disruption that PM Abiy one of his most controversial statements around the internet. Whiles addressing a press conference in August Abiy said if need be the internet will be cut because it was not as vital as water and air.

“Internet is not water, internet is not air. Internet is very important. However, if we use it as a revolution tool to incite others to kill and burn, it will be shut down not only for a week, but longer than that. For sake of national security, internet and social media could be blocked any time necessary.

“As long as it is deemed necessary to save lives and prevent property damages, the internet would be closed permanently, let alone for a week,” he is quoted to have said.

Early in the year, young people in the northern Tigray region reportedly blocked army trucks that were leaving the common borders with Eritrea. Regional State president Debretsion Gebremichael called for calm in the wake of the protests.

The regional leadership continued its fightback against federal authority taking off where they left off late last year when series of protests were held in the capital Mekelle and others areas tasking Abiy to respect the consitution. It slammed government of witch hunt in the arrests of former Tigray generals accused of corruption.

The Tigray Peoples Liberation Front, TPLF, were the only coalition partner that rejected the dissolution and birth of a new party, Prosperity Party, to replace the Ethiopian Peoples Revolutionary Front, EPRDF.

Reports said the late Ahmed Ali was buried immediately in accordance with Islamic norms. Abiy, a Christian, was born a Muslim and attended Islamic school as a young boy.

His mother, about whom he spoke fondly in his inaugural address in April 2018, was a Christian. The fourth wife of his father. Abiy was her last child.