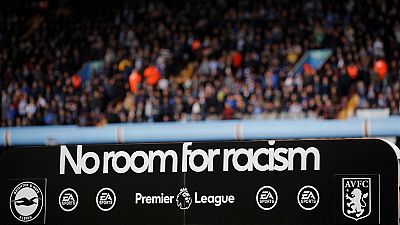 Ivorian football legend Yaya Toure has joined the list of personalities that have described racist fans as ‘stupid, foolish’.

In the Serie A last month, Italian striker Mario Balotelli threatened to walk out of a match between Brescia and Verona, when opposing fans shouted racist abuse at him.

Inter Milan’s Romelu Lukaku has also been at the receiving end of monkey noises from Calgiari fans.

Last week, Italy’s Serie A chief apologised for the ape artwork used for its anti-racism campaign which was widely criticized. The imagery by artist Simone Fugazzotto featured three apes with different color eyes and detailing.

Fugazzotto, who uses apes in much of his work, defended his creation, saying “we are all monkeys”.

In this article, we highlight some prominent personalities that have explained racism as actions by ‘stupid’ football fans.

Toure, who played for European club sides including Spain’s Barcelona and England’s Manchester City explained to the BBC why he believes racism has become more prevalent in football.

“Fans, people, now are more stupid than before,’‘ Toure said, adding that ‘it will be be difficult to win this case’.

Last month, the president of the Confederation of African Football (CAF), Ahmad Ahmad described racism in Europe as a case of “foolishness and discrimination”.

Ahmad who lashed out in a tweet, was reacting to incidents of racist behaviour against Madagascar international Marco Ilaimaharitra who plays in the Belgian league.

‘‘Foolishness and discrimination are not part of the game, and must be stamped out. It can’t stay unpunished,’‘ Ahmad said.

READ MORE: CAF president lashes out at racism in Europe

When Balotelli received racist abuse from Hellas Verona fans, he kicked the ball into the crowd and threatened to walk off the pitch, causing the match to be temporarily suspended.

The 29-year-old forward who has played 36 times for Italy and helped them reach the final of the 2012 European Championships, said racism ‘has nothing to with football’.

“You are getting into social and historical situations that are bigger than you, you small-minded people,’‘ Balotelli said in a message posted on his Instagram account.

“When Mario scored a goal for Italy, and – I guarantee you – I will do so again, you are fine with that, aren’t you?”

Last month, all 20 Serie A clubs made a united pledge to combat the racism issue, adding that there is ‘no more time to waste’.